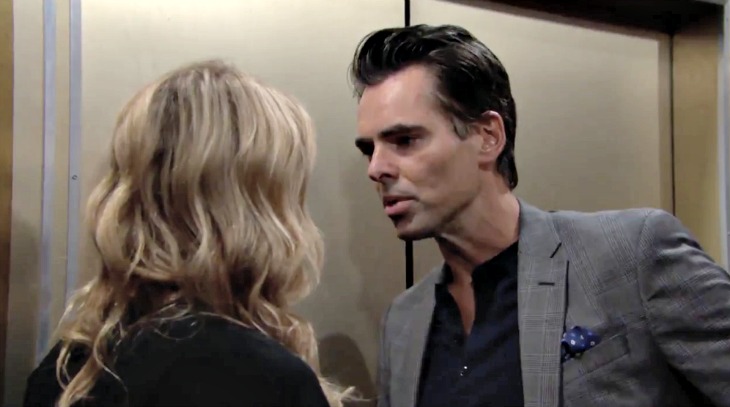 Billy (Jason Thompson) is out of control, again, on ‘The Young and the Restless’. However, one positive outcome results from his descent.

It’s hard to tell if Summer (Hunter King) actually wants to help Billy at this point, or is still trying to get back at Phyllis (Gina Tognoni). With whatever her intent, or if she’s merely acting in a stream of consciousness fashion, Billy is having none of it (right now).

Telling Summer that she was pathetic for throwing herself at him and then pushing her off at the Genoa City Athletic Club rooftop deck proves to be Billy’s momentary saving grace. This might be an early sign that the developing wreck he’s made of his life won’t be complete, althogh that would be an optimist’s take.

Meanwhile, ‘Philly’ remains in deep peril. Phyllis is completely lost, not knowing how to handle the other Abbott brother who she’s genuinely come to love.

Phyllis: “You’re falling and I don’t know how to stop it. Please tell me that this is as bad as it’s going to get.”

Y&R viewers know that Jack (Peter Bergman) has battled personal demons many times in the past. Phyllis proved to be a dominant influence in helping him to break his pill habit in recent years. While Neil (Kristoff St. John) has long been an ally to his friend Jack, Phyllis was the one whose strength of character literally rescued Jack in terifically played scenes at the Abbott cabin.

Digitally skipping to today, Phyllis knows that her relationship with Billy might not survive due to his addiction. In this instance, her recent efforts to support him failed. Her heartfelt attempt to manage Billy’s gambling problem actually enabled his behavior.

‘Philly’s’ crash may be underway, as there’s no telling how much damage Billy’s self-destructive path will cause himself and others this fall. Whether the relationship that he and Phyllis fought hard to create and maintain survives is unknowable.