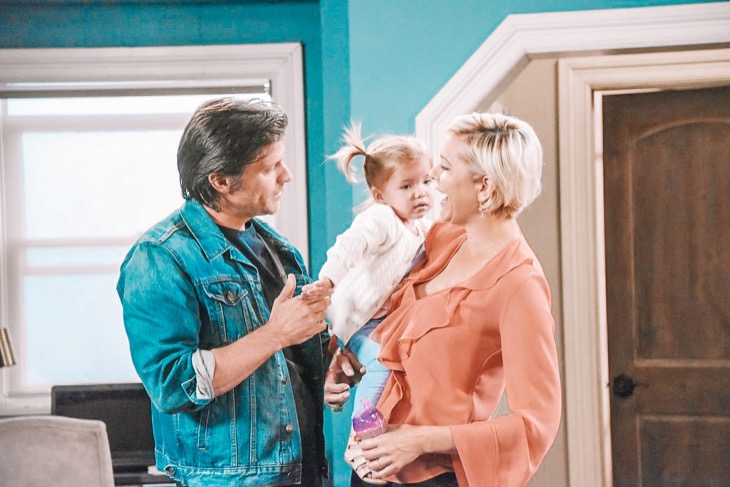 Days of Our Lives spoilers indicate that Eric (Greg Vaughan) and Nicole (Arianne Zucker) will soon reunite, but he will be surprised by the path that her life has taken ever since she left Salem. As a matter of fact, her first reaction when she sees Eric is to panic! Even though Nicole had her reasons for leaving Eric, she never expected for this to happen. What’s more, she never expected for the feelings between them to go away, either.

Actress Arianne Zucker, who plays Nicole on the hit NBC soap told Soaps In Depth, puts it this way, “She panics for several reasons. She’s had to make a deal with the devil, in a way, and seeing Eric just makes things harder for her.”

Eric lost Nicole once, and he’s not going to lose her again – regardless of what Xander has done. What Days of our Lives, weekdays on NBC. pic.twitter.com/VOqNOsJQqW

The deal that she’s referring to having to marry Xander (Paul Telfer) after he swiped the recording of Nicole confessing to killing Deimos. He then blackmailed her to being his bride.

Arianne added, “She’s trapped, lost, drowning, really, because of the choice she made, but she feels she had to save certain people’s lives – Holly’s, Eric’s, and kind of in a way, Brady’s, because he got so crushed, even though he’s the reason this all happened, really. I think that she’s trying to be selfless in a way, in Nicole’s survival way.”

Now what step Eric is going to take next remains to be seen. Fans will just have to tune in to find out what will happen next!

Days of Our Lives Weekly Spoilers October 8 to 12: Eric and Nicole Plot Xander’s Murder, Resolve to Get Rid of Vicious Blackmailer

And as always, don’t forget to check back with Soap Opera Spy for all the latest news, updates and spoilers on Days of Our Lives and all of your favorite daytime television shows right here!