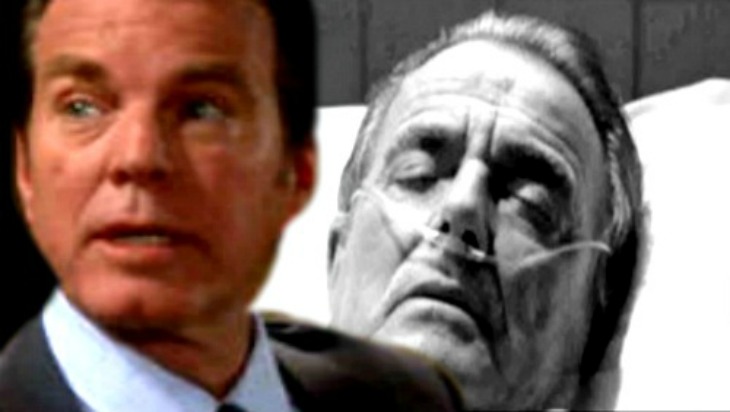 Fans of ‘The Young and the Restless’ who also watch ‘The Talk’ were recently reminded that Jack (Peter Bergman) once left Victor (Eric Braeden) for dead. Bergman discussed the famous scene where Victor collapsed, but Jack didn’t call for medical assistance on CBS’ mid-afternoon talk show that honored Y&R’s forty-fifth anniversary. Said flashback commentary plays into Mr. Abbott’s actions in the early spring of 2018.

Jack was tossing them down at the Genoa City Athletic Club when Ashley (Eileen Davidson) walked in. The siblings engaged in another verbal scuffle. Tipsy Jack opted to leave after a few loud jabs were taken in by the seated crowd of background extras.

Related: The Young and the Restless (YR) Spoilers: Dina’s Stunning Admission Must Be Verified – Jack Not John’s Son

After grabbing his 1990’s trench coat, the cosmetics prince bounded through the iconic revolving door and onto GC’s city street. He was going to hail a cab and head for the Ranch, where Victor has employed Barney Fife’s descendants for well over thirty years. A confrontation was likely expected but didn’t happen for an unexpected reason.

An aside to all fellow Y&R viewers. Considering all of the Moustache’s money, how in the name of Christian Miller have so many incompetent security personnel been hired through the years? The Newman estate is a sieve! Okay, now back to the storyline.

So Jack makes his way into the house and finds Victor lying at the bottom of the stairs. A terrifically filmed slow-motion sequence, replete with green screen magic, showed Victor falling backwards down the stairs after J.T. (Thad Luckinbill) and he battled to an early episode’s end.

What does Mr. Abbot do, especially in consideration of their decade-long battle, when he finds Victor? Well, he didn’t rush to call the paramedics. Instead, Jack helped himself to some items and then made a call for help.

Fans of ‘The Young and the Restless’ rightfully express their opinions on a regular basis. So, were you surprised that Jack didn’t leave Victor for dead? Please vote in our poll below!