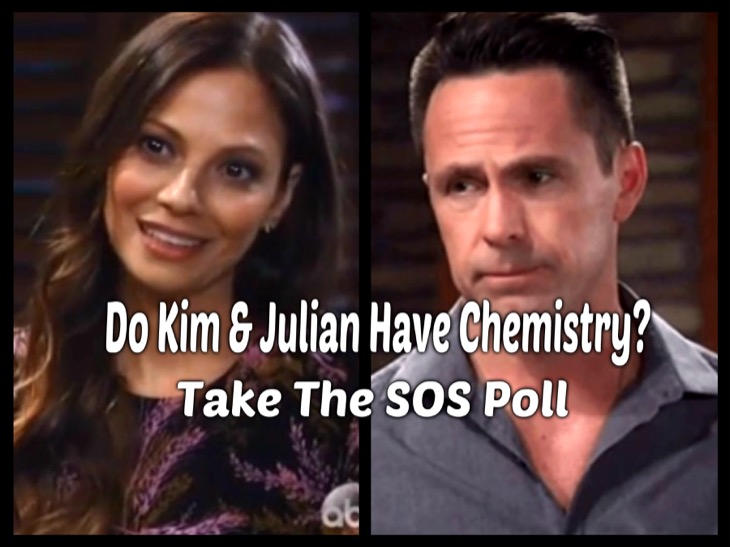 General Hospital Kim Nero (Tamara Braun) has been hanging around Julian for some time now; playfully calling him Charlie. She listened as Alexis praised Finn as a better man and a better fit. Kim seemed to be waiting in the wings as Julian slowly realized it was might be time to move on. While sharing some pie at Kelly’s, Julian and Kim seemed to be getting closer and as they were about to leave Kelly’s, Kim slipped and fell into Julian’s arms and they shared a passionate kiss. Will these two take it to the next level? Should they? There are many General Hospital fans who see tons of chemistry between these two and say Julian needs to forget about Alexis. After all, he did say he wanted a fresh start and Kim is a beautiful woman.

Other General Hospital Fans say Julian should never give up on Alexis. They say the couple is a match made in soap opera heaven. Alexis is only lying to herself and when she stops playing games she will realize she can not live without Julian. General Hospital fans also point to the fact that Julian is only interested in Kim as a rebound affair and will never love another woman. Fans also say Kim is still in love with General Hospital Drew Cain (Billy Miller) and when Kim finds out he is no longer with Sam Cain (Kelly Monaco) she will want to be with him. Fans say this is only a temporary affair.

Should Julian move on with Kim? You decide and please be sure to vote in our SOS poll.

The Young and the Restless Spoilers: Nick and Sharon Get Intimate – The Beginning Of Something New?