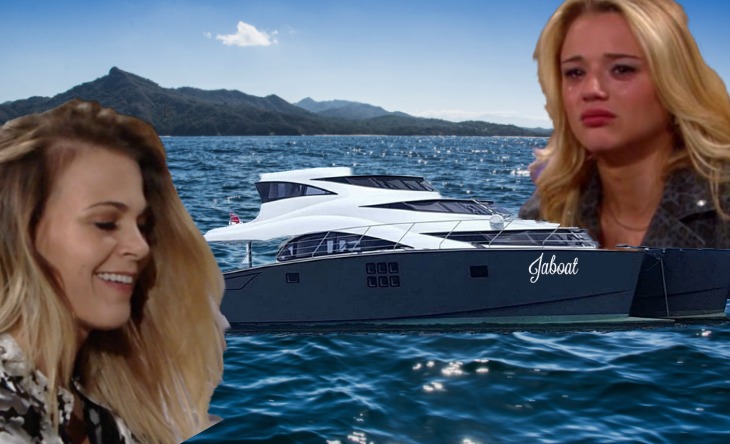 Based upon Summer’s (Hunter King) me-first behavior, some people might be hoping that this character is written off ‘The Young and the Restless’. But the poll question doesn’t ask about feelings. It’s fully okay for all readers to share they thoughts, as always. But, is Summer leaving GC?

Phyllis (Gina Tognoni) concocted a plan. She’s sending her daughter on an unknown excursion, via Jaboat.

Summer believed that she’d received a long-awaited signal from Billy (Jason Thompson). A received text message indicated that he wasn’t in Philadelphia at the trade show, but was on the company yacht he dubbed with the extended nickname.

Little did King’s character know that she’d been fooled by her mother. Phyllis sent that message to her daughter, making it appear as though it was from Billy.

The issue of Summer’s unexpected departure also opens the issue of whether King, herself, is exiting the cast. She’s a tenured member of the Life In Pieces’ cast. Season four of that comedy show will debut later this season. So, it’s reasonable to believe that King’s return stint at Y&R might be short-lived, which would make it similar to Thad Luckinbill’s (J.T.) dramatic, limited-run return that played out from late last year through early spring.

The reimagined edition of Summer that was presented to all GC residents was not pleasant. Self-involved to the max and manipulative, this character was rightly seen by the audience as was written, meaning a classic villain. Kudos to King in being open to the major shift her otherwise likable alter ego formerly exhibited.

👏 @ginatognoni is giving this performance 110%! RT to give her a round of applause. 👏 #YR pic.twitter.com/infEZ78Uzg

If the multiple Daytime Emmy Award-winner is returning to her other job, then it would make perfect sense to have Summer sent off on a trip, later learn that Billy rejected her advances, and opt to stay gone. It’s also plausible to believe that further scenes within that type of storyline climax are about to be presented.

Fans of ‘The Young and the Restless’ rightfully express their opinions on a regular basis. So, is Summer leaving Genoa City? Please vote in our poll below!