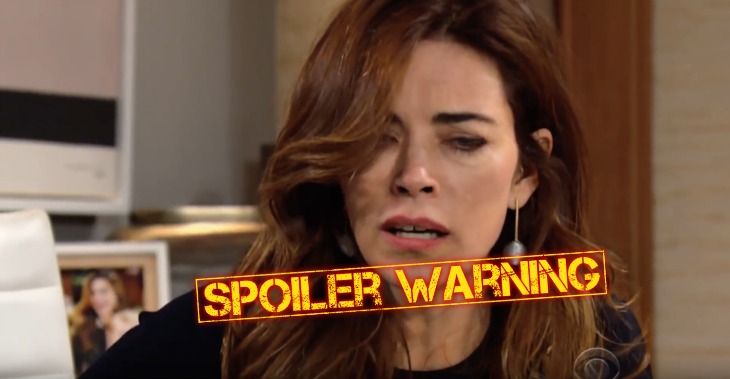 “The Young and the Restless” (YR) spoilers for Monday, August 27 through Friday, August 31, 2018 tease that “Will a mysterious stranger discover a secret that will push her over the edge.” We have a very exciting week heading our way and you will not want to miss a moment of the action!

Rey Wants To Find Out What Happened To JT

In the newest CBS “The Young and the Restless” promo video we see Rey Rosales (Jordi Vilasuso) asking a lot of questions. He will be trying to get to the bottom of what happened to J.T. Hellstrom (Thad Luckinbill). Victoria Newman (Amelia Heinle) will warn her crew that they need to stay one step ahead of Rey.

It seems like all the pressure and stress will really start to get to Victoria, but do you think it will end up making her crack? Nikki Newman (Melody Thomas Scott) has already realized that Victoria is spiraling, so could it be possible that this Rey guy will be what gets her to talk?

Billy and Phyllis Move Into The Abbot Mansion

Meanwhile, Billy Abbott (Jason Thompson) and Phyllis Summers (Gina Tognoni) will decide that there is no better time for them to pack up and get the heck out dodge than while Summer Newman (Hunter King) is out on Jaboat going around in circles on a lake with no cell reception. Billy will talk Phyllis into them moving into the Abbott mansion.

Ashley Abbott (Eileen Davidson) and Kyle Abbott (Michael Mealor) will not be so thrilled about them moving in, but of course, there is nothing they can do, after all, Billy is the only true Abbott. Billy will use the opportunity to keep a close eye on them, but at the same time, Kyle will discover ammunition to use against Billy.

As we all know Kyle is trying to make his way back up the ladder of the company and fast. Do you Y&R fans think it was a good idea for Billy and Phyllis to move in the Abbott mansion?

Lily Afraid To Be Locked Up

Elsewhere, Lily Ashby (Christel Khalil) will be worrying about what her future holds for her. She will end up breaking down and admitting to Abby Newman (Melissa Ordway) how scared she is about going to prison. Lily will feel that she can not survive being locked up.

Abby will offer her advice and try to calm her nerves. As for Devon Hamilton (Bryton James), he will be left to deal with things on his own. Do you Y&R fans think he will end up coming around and speaking up on Lily’s behalf? Do you think he will ever be able to get past this?

As you can see we have a very eventful week coming up, so make sure to stay tuned to CBS’s “The Young and the Restless.”