The Young and the Restless (YR) Poll: Are Nikki’s Tears Believable? – Arturo ON Hold, But Not Over 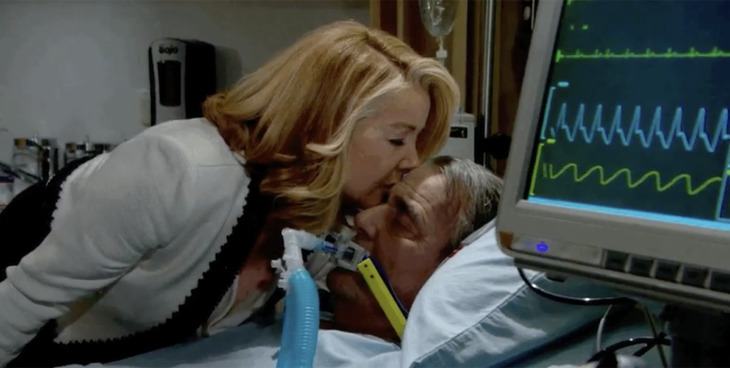 Nikki (Melody Thomas Scott) is by Victor’s (Eric Braeden) bedside this week on ‘The Young and the Restless’. There is no question that she remains connected to this man. But are her tears believable?

It’s not that anyone in the audience should believe that Nikki is putting on a full act. She does love Victor. But Nikki also told Nick (Joshua Morrow) that her relationship with Arturo (Jason Canela) was put on hold after Victor literally fell into a coma. Wouldn’t this life-threatening situation result in Nikki deciding that ‘Narturo’ is over?

Related: The Young and the Restless (YR) Spoilers: Lily Won’t Give Up – Simone Becomes an Option

Either Nikki is with Victor, or she’s not. There is no half-way point between two men in this instance, especially considering who the ‘Moustache’ was, is and will be, if he recovers.

Considering that Nikki doesn’t know what will happen to Victor, she should assume that he will pull through. So what would happen then; She would just continue on with Arturo?

Nick remains sickened by the situation. He learned the shocking truth a few weeks ago and confronted his mother about it. She admitted the truth but also said that ‘Niktor’s’ arrangement allows it. As Nick noted, Nikki didn’t specifically say whether Victor was aware of ‘Narturo’.

Sitting prostrate by Victor’s hospital bed, holding his hand, brushing his hair with her hand, kissing him on the head all seems a bit much. If she really loved this chap why would Arturo be in the bullpen? Yes, that was a reference to Canela’s run on the FOX network’s one-season baseball-themed series ‘Pitch’, where he played Omar Robles.

It’s very ironic that through most of ‘Niktor’s’ many connection points, Victor was often the one doing wrong. He treated Nikki badly, but not this time. In this iteration, Nikki is out of bounds. So why is she shedding so many tears?

Fans of ‘The Young and the Restless’ rightfully express their opinions on a regular basis. So, are Nikki’s tears believable? Please vote in our poll below!

RT to send your support to the Newmans. #YR pic.twitter.com/mZRGLXyrYq