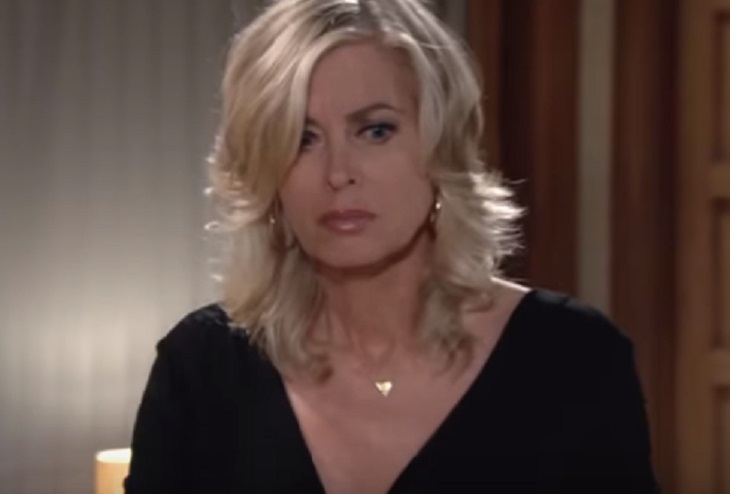 “The Young and the Restless” spoilers for Wednesday, June 27, tease that Ashley (Eileen Davidson) will worry about Newman. At home, she lets Abby (Melissa Ordway) see an article that’s meant to deny concerns about Victor’s (Eric Braeden) health. Ashley doesn’t have a lot of confidence in this strategy. They have a real crisis on their hands, so she hopes Victoria (Amelia Heinle) can offer more info.

Jack pops in with updates on the father hunt. He says he talked to Dina (Marla Adams) and got confirmation that Phillip Chancellor (Donnelly Rhodes) is his bio dad. Now Jack just has to prove it by exhuming Phillip’s body. Later, Jack admits his plan hit a snag. Jill (Jess Walton) is fighting him on this, but Jack vows to rev up his efforts.

Meanwhile, Ashley barges in Victoria’s office and wonders what the real Newman scoop is. Victoria is a bit dismissive, which irks Ashley. They quarrel, but eventually get on the same page about working together. However, Victoria’s certain of one thing. She maintains that there’s no way J.T.’s (Thad Luckinbill) behind the latest threat.

At the athletic club, Hilary (Mishael Morgan) ropes Lily (Christel Khalil) into a scheme. They manage to push Charlie (Noah Alexander Gerry) back in Shauna’s (Camryn Hamm) direction. The teens ultimately creep away from the adults to figure things out. At Crimson Lights, they clear up any confusion and decide they’re officially an item.

Back at the club, Lily belittles Hilary and quickly faces Devon’s wrath. Hilary makes a speech about how much she needs Cane and Lily’s support. They’re family to this baby, so Hilary wants peace. She also compliments Lily and Cane on their parenting skills. The whole gang settles down and looks to the future.

Afterward, Devon explains why he stood up for Hilary and declares his love for her. A touched Hilary professes her love as well, so they lean in for a steamy kiss. Over with Arturo (Jason Canela) and Abby, they also keep their romance moving along. Abby gets flirty with Arturo and plants a smooch on him.

Meanwhile, Ashley breaks up Jack’s shouting match with Cane. Once she pulls Jack aside, she finds out he intends to put Dina on the stand and have her testify. Ashley rages about Jack using their mother and argues that if he goes through with this, he’ll be even worse than Graham (Max Shippee).

Nearby, a fuming Cane makes a promise to Lily. He assures her that he’s going to fight Jack and protect Chancellor Industries. Cane’s glad he’ll have Lily by his side through it all. Back with Ashley, she tracks Victoria down again and reveals a shocker. Ash notes that there’s been a new transaction on J.T.’s credit card. He seemingly checked out of a motel in Genoa City.

Victoria listens as Ashley offers a stern warning. Someone matching J.T.’s description was seen in the area, so Ash thinks Victoria should prepare for trouble. “The Young and the Restless” spoilers say the drama’s about to heat up. We’ll keep you posted as other Y&R news and rumors emerge. Stay tuned to see what’s next on the CBS soap.

The Bold and the Beautiful RECAP Tuesday, June 26: Steffy Fed Up With Bill, Pam Suspicious Of Hope