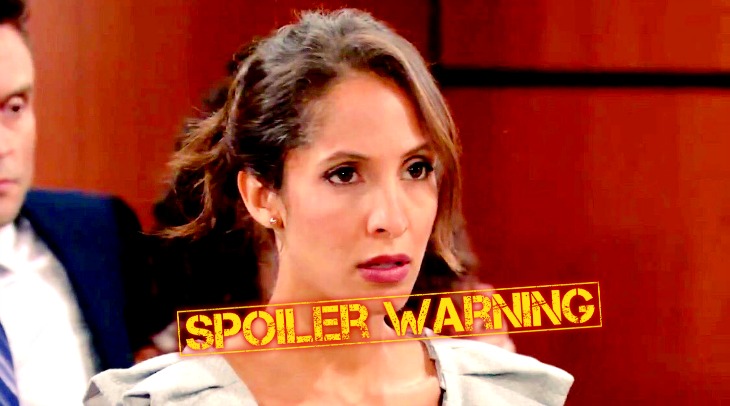 “The Young and the Restless” spoilers for Tuesday, September 4, tease that Devon (Bryton James) will change his mind and speak up for Lily (Christel Khalil). In the courtroom, Devon admits that he can’t stop thinking about what Hilary (Mishael Morgan) would want. This clearly isn’t it. Devon notes that Lily’s suffering with painful guilt, so he thinks that’s punishment enough.

The judge needs another recess to weigh his options. Devon doesn’t want to be around for a family celebration, so he takes off. Cane (Daniel Goddard) follows and encourages Devon to be there for the sentencing. They all need to come together right now. Devon eventually relents and rejoins the others in court. He comes back just in time to hear the judge’s decision.

Lily learns she’s getting 12 months in prison along with a hefty fine and community service. She tells her loved ones goodbye as Devon looks on. He lets Lily know that he didn’t want this outcome for her. Devon’s apologetic if his earlier words led to this, but Lily notes that he’s already done more than she deserved.

At Sharon’s place, she tells Mariah (Camryn Grimes) that Tessa (Cait Fairbanks) can’t stay there. Mariah’s upset that Sharon wants to kick Tessa out. After everything Tessa went through to help Crystal (Morgan Obenreder) and get home, Mariah thinks Sharon should have some compassion.

Sharon sympathizes, but still wants Mariah to be careful. Tessa enters the room and understands why Sharon’s wary. She vows to leave the cottage today and thanks Sharon for letting her stay the night. Once they’re alone, Mariah and Tessa mull over their money issues. They need a way to come up with $20,000 as soon as possible.

Tessa promises she wants to be with Mariah, but she understands if things are too complicated. Mariah insists she’s on board with this romance, but doesn’t want to take it too fast. Afterward, Mariah approaches Sharon for help. It’s regarding Tessa’s apartment at Rainbow Gardens, which has already been rented. Mariah wonders if Nick (Joshua Morrow) can pull some strings and score her another one.

Sharon voices her concerns about Mariah letting her feelings blind her. Mariah insists they’re going to move slowly, but she wants to give Tessa a chance. She urges Sharon to let Tessa pick up some shifts at Crimson Lights.

Tessa is back in Genoa City! #YR pic.twitter.com/odFZpmOhpA

Tessa reveals how grateful she is and assures Mariah that she doesn’t want to let her down. “The Young and the Restless” spoilers say the road ahead will be rocky, but can these two make it work? We’ll give you updates as other Y&R news comes in. Stay tuned to see what’s next in Genoa City.

Whether ur loving to love or loving to hate the #YoungandtheRestless at the moment, u still need to get ready for next week! Cause one way or another… it’s gonna get you in your feelings! Btw… we read all the comments below… so vent away! 🙂 U know u want to! #yr pic.twitter.com/sZebsDiegV