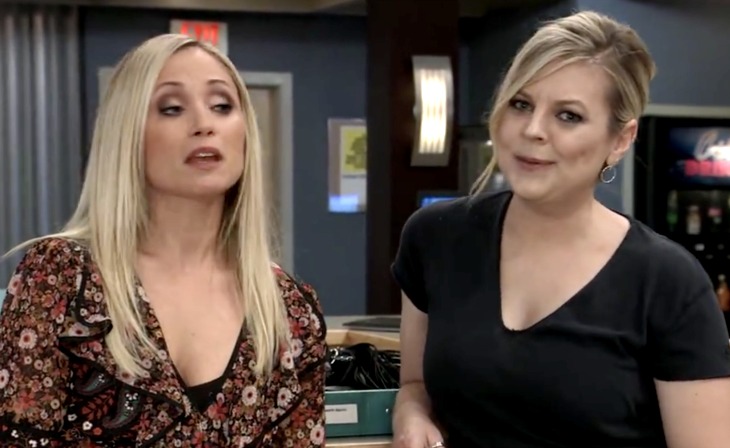 It looks like these two blonde beauties are best friends both on screen and off screen! General Hospital actresses Kirsten Storms and Emme Rylan have just shared a fun new message for their fans and from the looks of it, they had a great time recording it with one another. General Hospital viewers know Kirsten best as her character Maxie while Emme portrays Lulu.

In the trailer, titled ‘Tomorrow’s A Brand New Day,’ Kirsten starts off by saying, “We hope you guys are having a fabulous holiday weekend,” with Emme adding, “But get some rest tonight.”

Kirsten then continues with, “Because there’s a brand new GH airs” with both of them saying in unison, “Tomorrow!” Both ladies couldn’t help but giggle and laugh at their fun little message towards the very end.

Now, what’s in store for both Maxie and Lulu remains to be seen. After Nathan (Ryan Paevey) died back in February, Maxie distanced herself from her former best friend and even accused her for her role in Nathan’s death. Maxie has since warmed back up to Lulu, seeing that her friend needs her now more than ever before.

That’s because Dante is gone and she has no one to rely on. With both Maxie and Lulu finding themselves in similar situations – as single mothers no less – will they be able to repair their broken friendship? Can Maxie ever trust Lulu again? Fans will have to tune in to find out what will happen next!

Hospital airs weekdays on the ABC network. Check your local listings for times. In the meantime, drop us a line with your thoughts in our comments section below. And as always, don’t forget to check back with Soap Opera Spy for all the latest news, updates and spoilers on General Hospital and all of your favorite daytime television shows right here!

MUST WATCH The Bold And The Beautiful Preview Video Tuesday, September 4: Bill Vows To Do Whatever It Takes To Win