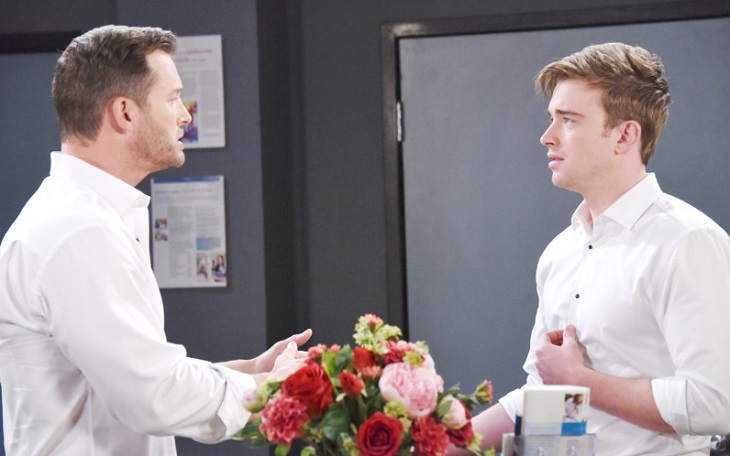 “Days of Our Lives” spoilers for Tuesday, September 4, tease that Roman (Josh Taylor) will face a difficult task. He’ll get updates on Steve’s (Stephen Nichols) situation and realize Kayla (Mary Beth Evans) needs to be brought in the loop. Since contract negotiations fell apart, Nichols left the show and Steve had to be written out in a hurry. It turns out Steve got arrested off screen, so Roman will explain.

Ever since Steve got his bionic eye, it’s been recording everything he sees. That includes classified ISA documents and any other information that could put lives on the line. Steve had no idea this technology was turning him into a spy, but that’s exactly what happened. He taken into custody on espionage charges, so Kayla will be shocked and dismayed.

“Days of Our Lives” spoilers say Kayla will make a painful admission. It looks like she’ll tell Roman about her deal with Stefan (Tyler Christopher) and all the trouble it’s caused. Kayla may feel responsible for Steve’s looming prison stint, but she couldn’t have predicted this DOOL mess. She just wanted to get Steve’s sight back, but her family’s facing another nightmare instead.

Elsewhere, Will (Chandler Massey) will deal with major “Days” drama. He’ll reach out to Paul (Christopher Sean) with a plan to let him down gently. Now that Will remembers his love for Sonny (Freddie Smith), he just can’t let this second chance pass him by.

However, Brady’s (Eric Martsolf) news will force Will to question his choice. When Brady answers Paul’s cell phone, he’ll reveal that his brother’s been badly injured. After Will rushes to the hospital, he’ll sit by Paul’s bedside and wonder what his next move should be.

Later this week, Will’s going to have a change of heart and stick with Paul for the time being. Thanks to Brady’s upcoming lecture, “Days” spoilers say Will will determine that he can’t walk away. Meanwhile, Kristen (Stacy Haiduk) will introduce herself to Stefan. She’ll find him at the DiMera mansion on Tuesday and suggest that she could really use his help.

Stefan may ask what he stands to gain from this arrangement, but they can surely come up with something. This could be the beginning of a wicked partnership, so stay tuned for more chaos. We’ll keep you posted as other “Days of Our Lives” details and rumors emerge. Stick with DOOL and don’t forget to check Soap Opera Spy often for the latest “Days of Our Lives” spoilers, rumors, updates and news.