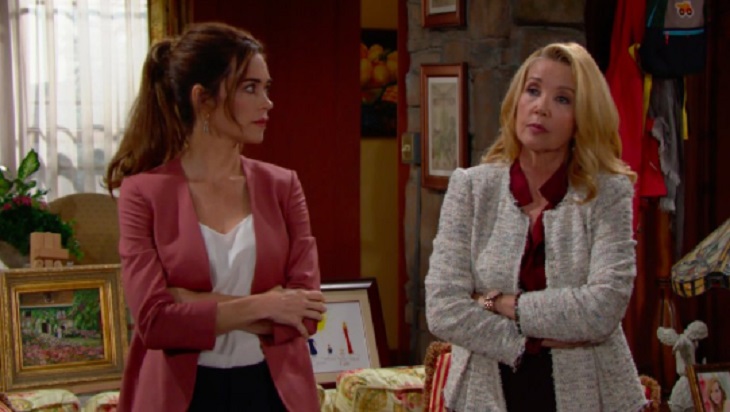 “The Young and the Restless” spoilers for Tuesday, October 16, tease that Ashley (Eileen Davidson) will face more backlash. At the Abbott mansion, Abby (Melissa Ordway) and Traci (Beth Maitland) are still reeling over Ashley’s revenge plot. They don’t understand how Ashley could sink that low and hurt Jack (Peter Bergman) so much.

Ashley feels her scheme was justified since Jack was just as hurtful. She rants about the blood-Abbott clause and how she wasn’t treated like a real Abbott. Traci and Abby can’t accept Ashley’s excuses, but she isn’t bothered. Despite the fact that Jack may never forgive her, Ashley isn’t sorry for what she’s done. She’s on top of the world thanks to her vengeful power plays.

Arturo gives Lola a hard time about Kyle (Michael Mealor) before heading over for some Jabot repairs. That broken glass isn’t going to fix itself! Meanwhile, Billy (Jason Thompson) arrives at the office and reveals that he completed the first portion of rehab. He’s now part of an outpatient program and has been cleared to return home.

Billy’s shocked when he hears about the latest Abbott family drama. He explains that he’d also like to give Ashley a piece of his mind. Billy thinks Ashley set him up for a gambling fall, but Kyle’s reaction suggests otherwise. Once Billy discovers that Kyle’s to blame, he’s ready to attack. Jack has to step in and make sure they don’t come to blows.

Arturo shows up and gets updates on the shattered window. He eventually gets a phone call from Abby, who’s concerned about the crumbling Abbott clan. Later, Jack joins the rest of the fam back at the house. Kyle, Traci, Abby, Billy and Jack reveal that they had a board meeting without Ashley. She’s taken aback to hear that the vote was unanimous. Ashley’s being removed as Jabot’s CEO.

Over with Nikki (Melody Thomas Scott), she’s adamant that the cover-up crew shouldn’t pay the blackmailer. Sharon (Sharon Case) and Victoria (Amelia Heinle) debate the situation with her. Nikki finally gets fed up and decides to send a payment after all. Once it’s done, Sharon’s dismayed to learn only a dollar was transferred.

Nikki insists she’s not going to let anyone push them around. She thinks the blackmailer will take the hint and leave them alone, but she’s mistaken about that. “The Young and the Restless” spoilers say more trouble’s brewing later this week! We’ll keep you posted as other Y&R news and rumors emerge. Stay tuned to see what’s next in Genoa City.