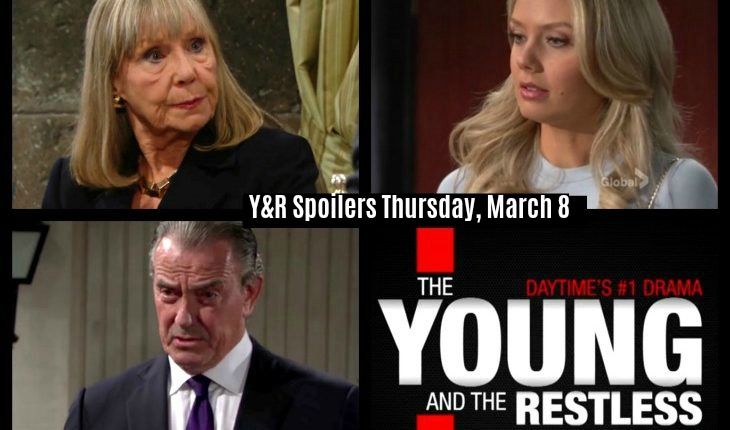 “The Young and the Restless” spoilers for Thursday, March 8, tease that J.T. (Thad Luckinbell) will spar with Victor (Eric Braeden). At Newman Enterprises, J.T. objects to being taken off the investigation into the leaked info. Victor wants it in the hands of someone objective, but J.T. snaps that Victoria (Amelia Heinle) would tell him if she were working with Jack (Peter Bergman).

Meanwhile, Nikki (Melody Thomas Scott) seems bubbly during a chat with Victoria. She mentions how happy she’s feeling these days. Nikki eventually realizes her daughter’s keeping secrets, but Victoria chooses to stay tight-lipped. She thinks Nikki and J.T. will be better off if they don’t know anything. Nikki wonders if that’s the best way to handle things in a relationship.

At home, Jack (Peter Bergman) waltzes in with Dina (Marla Adams) and reveals that they brought someone else with them. Abby (Melissa Ordway) jumps out to surprise Ashley (Eileen Davidson). Dina is confused and agitated around her daughter. She acts suspicious of Ash until Abby takes her in the kitchen.

Once they’re alone, Ashley lashes out at Jack for working with Victoria. After Abby returns and hears what’s going on, she heads over to Newman Enterprises. Abby lets Victoria know she’s in the loop on her sneaky plan. Afterward, Abby tells Jack she’s going to help Ashley clear her name.

Across town, Lily (Christel Khalil) shares her plan with Cane (Daniel Goddard). She wants to get another job right away. When Lily runs into Jack later, he offers to let her rejoin the Jabot staff. Lily suggests that she’ll give it some thought.

Cane pops in at Newman to box up some of Lily’s belongings. Despite Victoria’s desire to apologize, Cane insists Lily’s done working for her. He goes home and learns Lily scored a week-long modeling gig in New York.

Back with Ashley, she’s upset as her mother battles confusion. Dina thinks Ashley’s trying to harm her. Over with Victor, he confronts Jack about what he’s been up to. Victor wants answers about whether Jack’s in cahoots with Ashley or Victoria. Jack isn’t willing to divulge anything, so he argues that Victor doesn’t need help wiping out his own company.

Once Victor wraps up his confrontation with Jack, he finds Victoria and J.T. in a close moment. Victor surprises them by revealing his latest breakthrough. He believes he knows who’s responsible for leaking the documents to Jack.

It sounds like Victoria will get nervous, but Y&R rumors hint she may not get caught just yet. We’ll give you updates as other “Young and the Restless” news comes in. Stay tuned to see what’s ahead in Genoa City.

General Hospital Recap 3/7/18: Sam Admits She loves Jason, Where Do They Go From Here?

General Hospital Poll: Who Are You Rooting for Team JaSam or Team DreAm?