General Hospital Poll: Who Are You Rooting for Team JaSam or Team DreAm? 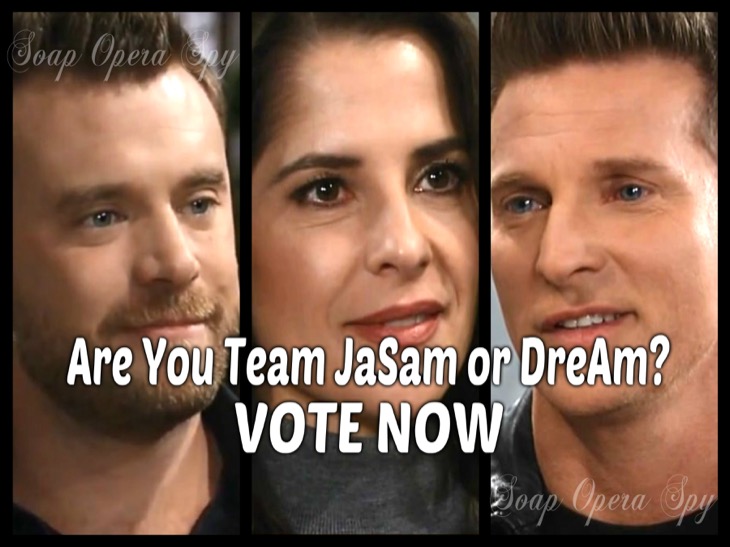 General Hospital residents of Port Charles have experienced a devastating earthquake, resulting in some very interesting pairings. Sam Cain (Kelly Monaco) and her former Husband Jason Morgan (Steve Burton) were caught up in a near-death situation when an aftershock caused a building to collapse and threatened to dump them into a sinkhole. Today the two former lovers declared their love for one another. It has been a while since these two have been this close.

Sam and Jason have always been a General Hospital fan favorite. They first came together when Sam lost the baby she was carrying for General Hospital Sonny Corinthos (Maurice Benard). They fell in love and though they had their troubles, remained in love until his Jason’s death at the hands of General Hospital Cesar Faison (Anders Hove) in 2012. JaSam fans were devastated.

In 2015 General Hospital Carly Corinthos (Laura Wright) mistook Andrew Cain (Billy Miller) for Jason Morgan when in fact Andrew was Jason’s long-lost twin brother; mind mapped with Jason’s memories in a scheme launched by General Hospital Cesar Faison (Anders Hove). Sam fell in love with Drew thinking he was her beloved Jason. Once the real Jason returned and Sam realized she was married to his brother and decided to stay with Drew declaring she had changed and Drew was now the man she loved. She told Jason he was part her past only.

General Hospital JaSam fans are delighted that Sam has finally confessed her love for Jason. They believe it is long overdue.

Other General Hospital DreAM fans believe Sam is only reacting to the moment and when the dust settles she will come to her senses.

General Hospital spoilers show Sam will tell Drew that she was with Jason during the quake, but will she tell him that she confessed her love to him? Will Drew be devastated or chalk up her feelings an emotional happening? Is Jason finally willing to fight for the love of his life now that he knows she never stopped loving him? Trouble is coming in the days ahead while the four try to figure out this mess.

How about you? Are you Team JaSam or Team DreAM? You decide who should Sam be with? Is Drew her true love, or is it, Jason. You decide and please be sure to vote in our Soap Opera Spy Poll right here.

MUST WATCH: The Bold And The Beautiful Preview Video Thursday, March 8: Quinn Hears Bill Was Shot, She’s Not Upset – Did She Pull The Trigger?

General Hospital Spoilers: Michael Has The Backing Of Everyone In Port Charles – Can…