The Young And The Restless Spoilers: J.T. Really Alive Or Evil Twin Back For Revenge? 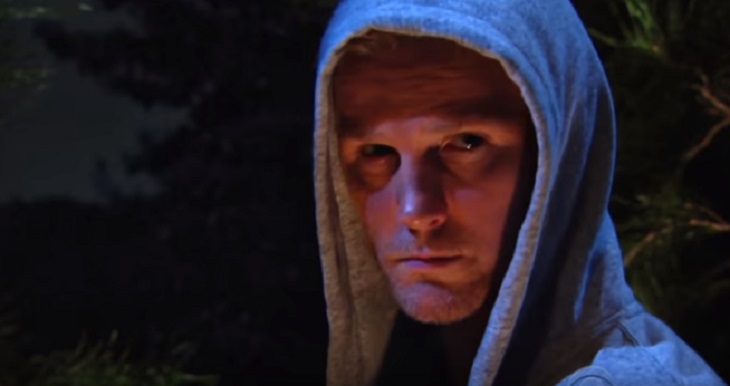 There are many options regarding the J.T. (Thad Luckinbill) storyline on ‘The Young and the Restless’. Among them include the real possibility, not frantic coverup crew opinion, that J.T. was never killed and is back for revenge. But that option is hardly the only one that exists.

Okay, so J.T. had a faint heartbeat that wasn’t detected. Then, after being buried he woke up, dug himself out of the unauthorized makeshift grave in Chancellor Park and is back for revenge.

His face, poking through a hoodie, was seen outside the cottage. One of the more chilling and simultaneously hilarious reaction shots in recent memory had Nikki (Melody Thomas Scott) and Sharon (Sharon Case) looking out the window at this mystery man whose back was initially turned toward them. When the ghoulish face was spotted he looked somewhat like J.T., but then again, maybe that wasn’t him?

This week’s ending episode was purposely filled with a party for Billy (Jason Thompson) the kid and Kyle’s (Michael Mealor) grave-dig toward Phillip II (Donnelly Rhodes). Those storylines appeared intended to throw viewers off. Digitally skip to the final scene and hoodie man, who was first seen on Newman Enterprises security footage more than a week ago, is standing in front of Sharon’s house.

Why would J.T. be there? As Phyllis (Gina Tognoni) recently told Sharon, J.T. wasn’t even aware that they were in Vickie’s (Amelia Heinle) house on that fateful night. However, if Nikki’s head-conk didn’t kill J.T. he could have heard the four voices of all ushers who carried his rug-coffin to the grave site.

Now, assume for a moment that the latest intruder at the Ranch (as there have been so many through the years) isn’t J.T. Hellstrom. Well, then he’s either an unknown twin brother, or a doppelganger. In either instance, it could be Luckinbill playing this alternate character, or possibly his real life twin brother, Trent.

Trent Luckinbill is currently a producer, but did act earlier in his career. He actually appeared on Y&R in 2005 in an uncredited role, which was during Thad’s period of absence from the show.

It would be ironic and an inside joke if Trent is actually playing J.T.’s, revenge-seeking twin brother. The look-a-like angle would beg a question. How would someone who merely looked like J.T. know all that’s happened and apparently be acting on that information now, including attacking Newman Enterprises?

Of course, any non-J.T. storyline could also include another actor who simply resembles Thad Luckinbill, if it’s not Trent.

It must be added that fans have been asked to assume that the man who was in Genoa City from December though last month was actually J.T. and not an impostor. If that was an impostor, than J.T. wasn’t killed by Nikki.

Fans of ‘The Young and the Restless’ rightfully express their opinions on a regular basis. So, who did Nikki and Sharon scream at?

MUST WATCH The Bold And The Beautiful Preview Video Monday July 9: Sally Has Had Enough Of Hope Logan

The Bold and the Beautiful Spoilers: Steffy Forrester Is Not Letting Hope’s Baby Come Between Her And Liam