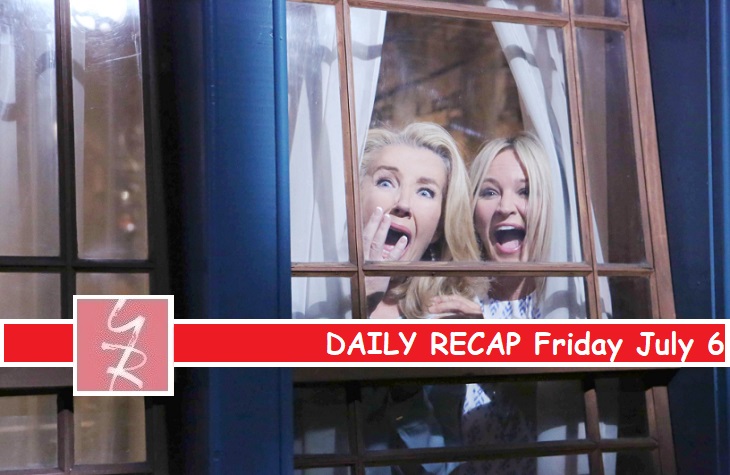 “The Young and the Restless” (YR) recap for Friday, July 6, 2018, reveals that over at Jabot, Summer Newman (Hunter King) checks on Billy Abbott (Jason Thompson) and feels bad for him and wants to help. He is upset and says his only option is to win back the company yacht before anyone finds out.

Over at Crimson Lights, Phyllis Summers (Gina Tognoni) invites Sharon McAvoy (Sharon Case) to a surprise birthday party that she is planning for Billy Abbott on the yacht. Sharon does not feel like partying. She is too distracted from the news about J.T. Hellstrom (Thad Luckinbill).

Phyllis gets the invites sent out. Out on the patio, Arturo Rosales (Jason Canela) and Abby Newman (Melissa Ordway) make out. He reveals that Victor Newman (Eric Braeden) is doing stuff to mess with him again. Abby then comes up with the idea to get a suite and charge it to her dad’s account.

Billy Finds Out About His Surprise Party

Back over at Jabot, Summer Newman gets an invitation to Billy Abbott’s surprise party. She then warns Billy. Billy calls Phyllis to let her know Summer let the cat out of the bag and he wanted her to know the yacht was getting repairs. Phyllis then decides she will just have the party at home.

Over at Newman Enterprises, Victor Newman rants about Scott Grainger (Daniel Hall) being behind the article of him making J.T. Hellstrom disappear. Nikki Newman (Melody Thomas Scott) is shocked that Scott would do such a thing.

Over in Victor’s office, Ashley Abbott (Eileen Davidson) wants to chat with Victor about the company is under siege. Victor does not want to talk but Ashley is persistent. She is worried about her role at the company. Ashley says she has to protect herself and her family and quits.

Nikki and Abby Battle It Out

At the Athletic Club, Abby Newman tells Arturo Rosales she is going to confront her father. He will not let her go. They run into Nikki Newman who says Victor is handling a crisis involving Newman Enterprises. Abby rants about her dad messing with Arturo again.

Nikki tells her that her dad hasn’t done anything and that it’s been her. Nikki and Abby go at it. Nikki tells her she warned them. Nikki states that no one messes with Nikki Newman and leaves. Arturo talks Abby into going to Billy Abbott’s party.

Ashley Welcomed Back to Abbott

Billy Abbott and Summer Newman arrive at the apartment. Phyllis Summers has the party set up. Kyle Abbott (Michael Mealor) arrives and updates them on things with Jack Abbott (Peter Bergman). Summer asks Kyle where his date is and he reveals he dumped her.

They drank the rum punch. Kyle admits to drinking stronger stuff to get over her. Ashley Abbott arrives and announces she quit at Newman Enterprises and wants to come back to Jabot as COO. Abby Newman and Arturo Rosales arrive as Ashley says “Goodbye Newman, hello Jabot.”

Abby is not happy about her mother leaving her. Ashley tells Abby to stay at Newman and exploit Victor Newman’s distrust of Victoria Newman (Amelia Heinle). Ashley then chats with Billy. Billy is sure about her coming back. Phyllis snarks about her trying to run things.

Ashley insists she will not get in the way since Billy is doing such a good job. Billy tells her he doesn’t need a watchdog and Kyle Abbott wants to be considered for COO. Summer gets everyone’s attention back on the party.

Summer and Kyle chat and he doesn’t know where he belongs and thinks he should just dig up Phillip Chancellor’s grave himself. Billy receives a text from Jack and Traci Abbott (Beth Maitland) telling him to hire Ashley and if he doesn’t they promise to embarrass him with a board vote.

Billy and Phyllis wonder if they can get Kyle on board, but Summer reveals he left. Later on, Billy gets a text from Lauren Baldwin (Tracey E. Bregman) saying she will support Ashley. Billy feels defeated and welcomes Ashley back.

Nikki Newman pays Sharon McAvoy and visit. She rants about Victor Newman possibly being charged with murder. They speculate on whether J.T. Hellstrom could be alive. Talk turns to Christian’s custody case. Nikki just wants a normal night. She says it is all she can do to not confess to Victor. Sharon gives her a pep talk. They hear a noise outside and look out the window. A hooded figure turns around and it’s J.T. They both scream hysterically.

In the cemetery, Kyle Abbott digs up Phillip Chancellor’s grave. And that’s a wrap. Don’t forget to check often with Soap Opera Spy for all your soap needs.

The Bold and the Beautiful RECAP Friday, July 6: Steffy Learns Hope Is Pregnant