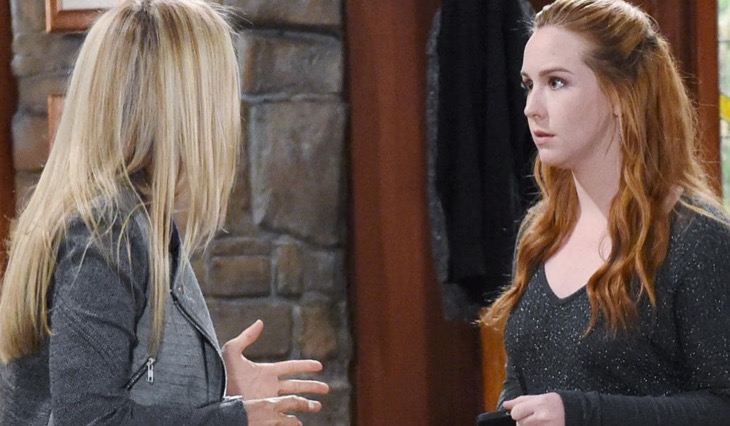 “The Young and the Restless” recap for Wednesday, July 11, 2018 reveals that over at the apartment, Phyllis Summers (Gina Tognoni) debates on what she is having for dinner and then decides to go surprise Billy Abbott (Jason Thompson) with takeout who is supposed to be working late.

Summer protests that she can not go. Summer lies and tells her mother that Billy is trying to land a big deal to impress Ashley Abbott (Eileen Davidson) and does not need to be interrupted. Summer offers to take Phyllis to dinner. While Phyllis is getting ready Summer shoots Billy a text to hurry up with his poker game at the Athletic Club. Summer tries to get her mom to go to the Top of the Tower but is unsuccessful and they go to have dinner at the Athletic Club instead.

Over at Sharon McAvoy’s (Sharon Case) place, Nick Newman (Joshua Morrow) gets a text to call Brittany Hodges (Lauren Woodland). Nick calls and is informed that there will be a ruling by the end of the day on who gets Christian. Nick tries to assure Sharon that Victor Newman (Eric Braeden) will not get his way this time. He has to leave and reassures Sharon that she is safe.

At the Dive Bar, Hilary Curtis (Mishael Morgan) and Mariah Copeland (Camryn Grimes) cut to commercial and she calls out Nate Hastings (Brooks Darnell) for laughing at their segment. They bicker back and forth until it is time for Hilary to go back on air. After the show they bicker some more and Hilary introduces him to Mariah and then leaves. Mariah finds it funny that Hilary is so protective of her show.

Over at the penthouse, Nate Hastings confronts Victor Newman about cancelling his appointment with the physical therapist and postponing their visit. Victor says he had other priorities and Nate is not happy. He advises him he could be hitting the ground next time instead of the glass of water he dropped. After examining Victor Nate feels he has taken a step back and insists he stick to the treatment plan. After Victor leaves Nate sees Hilary Curtis exit her apartment and realizes he is locked out.

Mariah Copeland goes and sits with her mom while she waits on the custody ruling. Talk turns to J.T. Hellstrom (Thad Luckinbill). Mariah reveals something has been bothering her and asks if J.T. was upstairs with Victoria Newman (Amelia Heinle) the night of their party. Sharon changes the subject but Mariah is persistent. Sharon admits he was there and says she helped him leave town. Mariah questions if she helped Victoria do it and is shocked that Nikki Newman (Melody Thomas Scott) would just let him leave. Mariah worries they would have had to bash him over the head if he turned on them. Sharon tells her Nick Newman can not ever know. Mariah is not going to tell.

Over at the Athletic Club, Summer Newman tries to look at her phone but Phyllis Summers wants her to put it up. Summer distracts Phyllis by having her to go to the kitchen to check on something while she texts Billy Abbott. When she gets back a guy walks up and asks is she is going to the game upstairs and mentions her friend is there. Summer cuts him off and after he is gone she questions Summer about it. Summer tells her he was talking about a new video game. Phyllis wants to go play. Summer tells Phyllis that she is just trying to ditch her.

Back at the Dive Bar, Victor Newman arrives and gives Nick Newman an awful look. Nick is finishing up a meeting. Victor points out Nick must be confident about the ruling and Nick just hopes it does not get leaked. They both receive an email and read them.

Back at the apartment, Phyllis Summers and Summer Newman are happy to have had time together. Phyllis can’t believe Billy Abbott hasn’t made it home yet. Summer goes upstairs and texts Billy. Phyllis leaves. Later Summer comes downstairs and text Billy again letting him know she distracted Phyllis.

Phyllis Summers goes to Jabot. It is dark there and she gets a text from Billy Abbott that he is still at work and not to wait up.

Phyllis Worries Billy Cheating On Her

At Crimson Lights, Phyllis Summers and Hilary Curtis meet up. Phyllis is worried that Billy Abbott is cheating on her. Hilary gives her a number to a private investigator.

Nick Gets Custody of Christian

Back at Sharon McAvoy’s place, Nick Newman arrives home. Sharon is suddenly saddened until she realizes baby Christian is with Nick Newman. He tells her the arbitrator ruled in their favor due to his father’s health crisis.