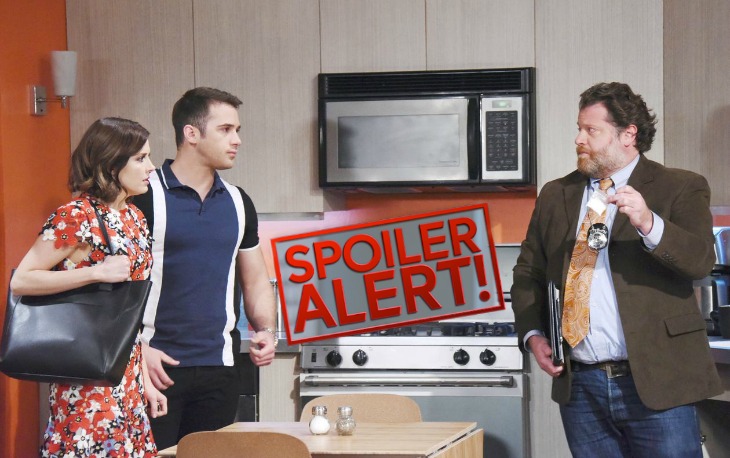 “Days of Our Lives” spoilers for Thursday, July 12, tease that Theresa (Jen Lilley) will meet back up with Brady (Eric Martsolf). She’ll want to make a last-ditch effort to put their family back together. Theresa will insist that they could reunite and raise Tate (Colin and Kyle Schroeder) under the same roof. She’ll beg Brady to put this custody war behind them and focus on what could be a bright future.

Of course, Brady won’t be willing to bail on Eve (Kassie DePaiva). Thanks to this vicious battle, Brady’s feelings for Theresa are barely there anymore. He’ll maintain that he wants to build a life with her sister, so Theresa will be out of luck. She’ll have to accept the situation and just concentrate on pulling Tate closer.

Ted’s (Gilles Marini) been doing a great job as Theresa’s lawyer, but an unexpected blow is headed his way. “Days of Our Lives” spoilers say drugs will be found in JJ’s (Casey Moss) apartment. Eve recently pushed Victor (John Aniston) to help Brady, so this is the strategy he’ll go for.

The drugs will undoubtedly be planted among Theresa’s things, which means she’ll be under fire at the custody hearing. By the end of the week, JJ will take the blame to preserve Theresa’s shot at winning. It sounds like this storyline will heat up with some shocking twists and turns.

Other “Days” spoilers say Abigail (Marci Miller) will be a nervous wreck. She’ll prepare for the paternity test results and hope her life isn’t torn apart. Abigail desperately wants this baby to be Chad’s (Billy Flynn), but she knows Stefan’s (Tyler Christopher) an option, too. She’ll just have to worry until the big news arrives.

Gabi experiences excruciating pain and is rushed to the hospital. #Days #DOOL pic.twitter.com/4YE0KrtL66

Until then, Gabi (Camila Banus) will get some big news of her own. DOOL fans know Gabi faced some serious spasms at the Kiriakis mansion. Maggie (Suzanne Rogers) took Gabi to the hospital, so she’ll be examined by Kayla (Mary Beth Evans) soon.

“Days of Our Lives” spoilers say Gabi will find out she’s infertile. That beating she took in prison caused severe internal injuries and now Gabi can’t expand her family. Kayla’s updates will weigh heavily on Gabi as she makes her next manipulative move.

Gabi will change the results of Abigail’s paternity test, so a good dose of revenge is brewing! We’ll keep you posted as other “Days” details and rumors emerge. Stick with DOOL and don’t forget to check Soap Opera Spy often for the latest “Days of Our Lives” spoilers, rumors, updates and news.