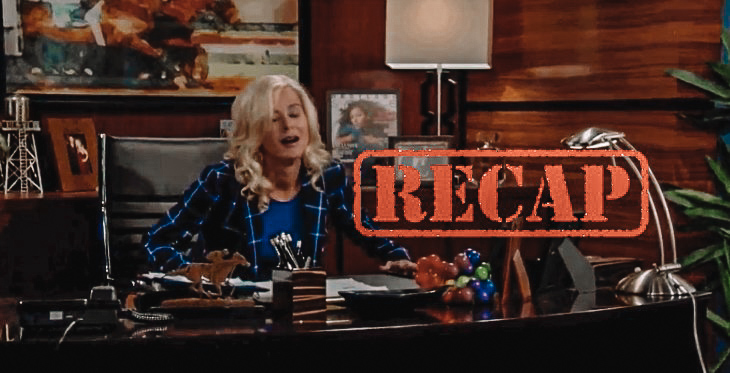 “The Young and the Restless” (YR) recap for Monday, October 8, 2018 reveals that over at Sharon McAvoy’s (Sharon Case) place, she and Mariah Copeland (Camryn Grimes) dicuss whether it was a good idea for Faith Newman (Alyvia Alyn Lind) to be back at school.

Phyllis Shows Up At Jabot

At Jabot, Phyllis Summers (Gina Tognoni) shows up for work. Ashley Abbott (Eileen Davidson) joins Traci Abbott (Beth Maitland) and Lauren Fenmore Baldwin (Tracey E. Bregman) in the office. They debate on whether they should involve Phyllis in their meeting.

Jack Abbott (Peter Bergman) arrives at Dark Horse. He, Abby Newman (Melissa Ordway), and Tessa Porter (Cait Fairbanks) wonder if Nick Newman (Joshua Morrow) will be showing up for work. Shortly after, Nick appears and says he is starting over and plans to marry Sharon McAvoy. Once alone, Nick and Abby discuss his behavior. Victoria Newman (Amelia Heinle) appears and asks him why did he sleep with Phyllis Summers. Jack appears and tells Abby they have to go to Jabot.

Summer has a rude awakening today on #YR. pic.twitter.com/YbNwzj156R

In her bedroom, Summer Newman (Hunter King) wakes up alone and calls out for Billy Abbott (Jason Thompson). She texts him to come stay with her again.

Back over at Jabot, Phyllis Summers texts Billy Abbott before taking a call from Summer Newman. Phyllis asks Summer if she has seen Billy and Summer says she hasn’t. In the office, Ashley Abbott learns that Billy has checked himself into rehab.

Ashley announces she called a meeting so Traci Abbott can remove the blood Abbott clause. Traci is not sure about it. Out in the hall the temporary secretary lets Phyllis know they want to see her so she joins everyone in the office. They catch her up to speed and Ashley wants to go ahead with the meeting. Traci motions to remove the clause and Ashley seconds it.

Ashley’s taking her seat in the CEO chair! #YR pic.twitter.com/iahIPbXhUW

When Jack Abbott, Abby Newman, and Kyle Abbott (Michael Mealor) arrive they learn the blood Abbott clause is no longer in place. Now they need a new leader and Ashley puts herself up for vote. Kyle nomiates Jack. The vote ends up tied and Traci abstains. Jack points out she has already voted on Ashley before. Kyle walks out and Phyllis goes behind him.

Kyle Rats Summer Out To Phyllis

Out on the hall, Phyllis accuses him of telling Sharon McAvoy about him and Nick Newman since Summer denied being the one that told. Kyle lets her know that it was Summer’s big mouth that got her busted because Mariah Copeland overheard her. Back inside the office, everyone congratulates Ashley. Once alone with Jack, he let’s Ashley know there is no hard feelings and she deserved to be CEO.

At the police station, Sharon McAvoy shows up for work ranting to Rey Rosales (Jordi Villasuso) about the wedding not happening and Nick Newman cheating. Nick appears wanting to talk to Sharon, but she goes into the interrogation room to get away from him. Nick goes to follow, but Rey stops him.

Sharon Catches Nick and Phyllis Together

At the Athletic Club, Tessa Porter wants to treat Mariah Copeland before she leaves. Phyllis Summers appears and confronts Mariah. Mariah let’s her know that she only has her self to blame and tells her to grow up. Phyllis goes over to the bar and Nick Newman appears. They wonder if they should be seen out in public together. Sharon McAvoy appears and goes off on them. Sharon informs Nick they are done.

Victoria Gets A Threatening Letter

At Crimson Lights, Summer Newman leaves Billy Abbott a message letting him know she understands why he had to rush off and knows he is in rehab and looks forward to seeing him when he returns. Out on the patio, Victoria Newman is opening her mail and comes across a cryptic note that says, “I know what you did and I’m going to make you pay.”

The Bold and the Beautiful RECAP Monday, October 8: Will Thrilled To See Bill, Katie Feels Guilty