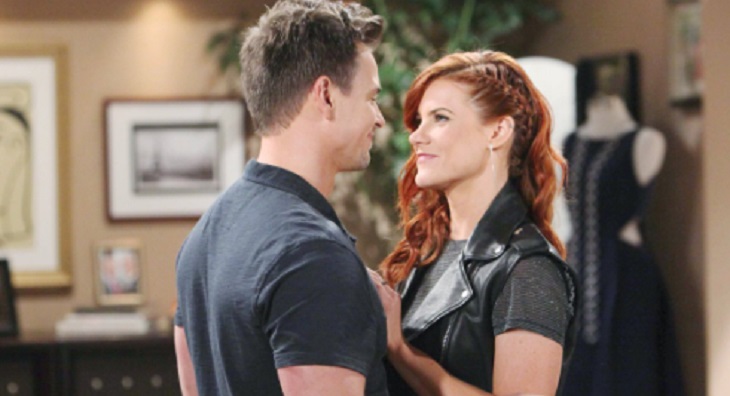 He admits it was about the custody hearing. Ridge wants Steffy to drop it, but she doesn’t. She says Brooke has no reason to blame Ridge. They hug and she leaves for a meeting. Ridge flashes back to when Brooke told him the truth had to come out.

In the office at Forrester Creations, Bill Spencer (Don Diamont) assumes the judge thought he was a lousy father. Brooke Logan Forrester tells Bill there is nothing he could have said or done to change the judges mind. Brooke admires how Bill handled himself with integrity. She assures him she will always be in his corner. Bill calls Brooke his “biggest loss.”

Bill realizes all he did wrong and points out that is why he didn’t influence the judge. Bill talks about honesty then how has money and power, but not what means the most- family. Out in the hall, Pam Douglas (Alley Mills) talks to Steffy Forrester Spencer about Bill being there. Back in the office, Bill tells Brooke her support reinforced how special she is. Then tells her that it has always been her. He kisses her passionately as Steffy opens the door.

In the design office, Wyatt Spencer (Darin Brooks) sneaks up behind Sally Spectra (Courtney Hope). Wyatt informs her she just got kissed by Forrester’s new social media manager. Sally is excited for him. He tells her he has to figure out how not to be distracted by her. Sally kisses him. She tells Wyatt to lock the door. They dicuss him having to tell Bill Spencer about his new job. Then start kissing again. And that’s a wrap. Don’t forget to check often with Soap Opera Spy for all your soap needs!

‘The Bold And The Beautiful’ Spoilers: Brooke Stunned By Ridge Marriage…

The Bold And The Beautiful Spoilers: Filming Updates – Have Spouses Or Dolls…