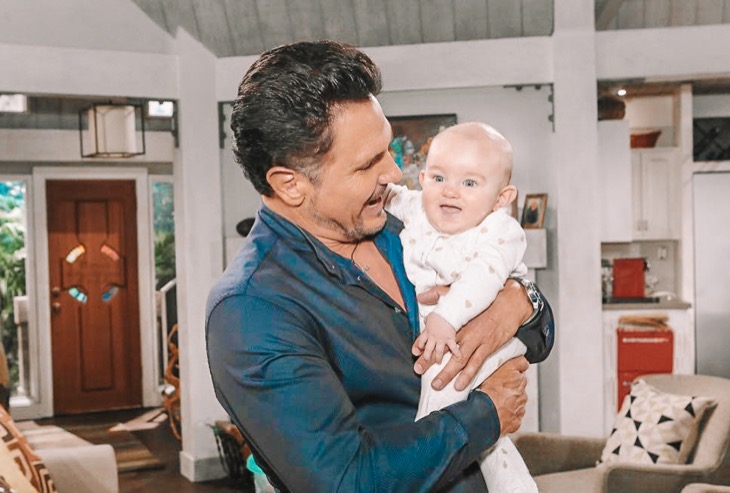 The Bold and the Beautiful (B&B) spoilers reveal actor Don Diamont, who portrays Dollar Bill Spencer has stated that he thinks it would be really fun if he turned out to be baby Kelly’s father. How do you feel about the possibility of Bill, not Liam Spencer (Scott Clifton) being Kelly’s daddy?

B&B sources at Soap Opera Digest tease that Diamont jokes, “Talk about conflict!” and he would be right. What better time for that to come out as Bill is up to his neck in trouble and it appears more is about to head his way. He has literally just begun to mend fences with his older sons, Liam and Wyatt Spencer (Darin Brooks) after causing so much havoc in their lives doing absolutely unspeakable things.

He is slowly reconnecting with his very young son, Will Logan Spencer (Finnegan George) after neglecting him while he was busy chasing around his daughter-in-law, Steffy Forrester (Jacqueline MacInnes Wood) and now he was just spotted kissing Ridge Forrester’s (Thorsten Kaye) wife, Brooke Logan Forrester (Katherine Kelly Lang). Is there ever a moment in Bill’s life that isn’t filled with drama?

The Bold and the Beautiful spoilers show that Bill is desperate to prove he is a changed man, and his older sons are buying it, especially when he has an emotional moment when he holds his granddaughter, Kelly. Don Diamont is making it very clear that he does not know if there is a storyline coming that he will be Kelly’s father, but he admits he would be excited as much as fans would be at how epic and explosive it would be for it to happen.

The potential is great with so many of the characters involved, like Brooke, Ridge, Steffy, Hope (Annika Noelle), Liam, Wyatt, Eric (John McCook), Quinn (Rena Sofer), Katie (Heather Tom) and Thorne (Ingo Rademacher); just to name a few. If there was a paternity slip up, how do you feel about Bill potentially being Kelly’s father?

Be sure to tune into CBS’ The Bold and the Beautiful (B&B) to catch up on all the exciting stories happening right now. Check Soap Opera Spy often for updates, news, rumors and spoilers!

The Young and the Restless Poll: Will Nikki, Vickie, Phyllis, and Sharon Pay For Killing JT?