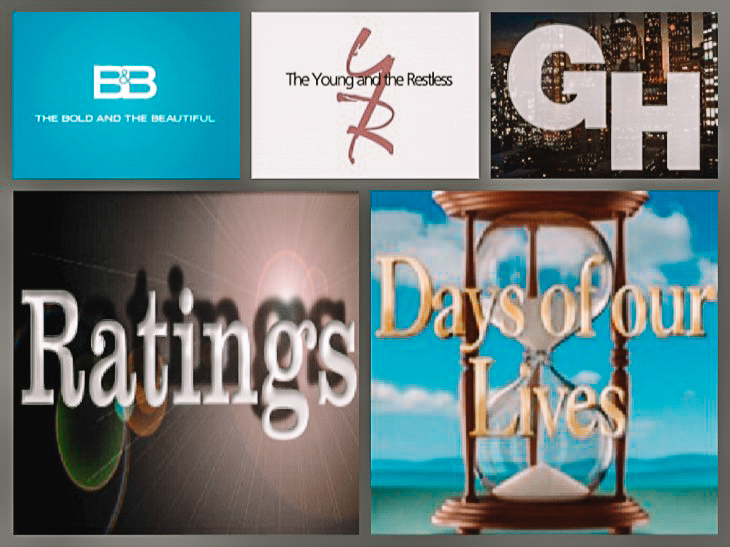 Soap Opera ratings were reported by Soap Opera Network for the week of Monday, September 17 through Friday, September 21, 2018 and it seems there were no interruptions nor pre-emptions this week that would have effected the ratings, so let’s see how all four of the daytime dramas did this week!

NBC’s DOOL is the only soap opera to rise in both total viewership, by 58,000 ending with 2,142,000 in total viewership and also gaining 18,000 among women viewers ages 18-49. It is revealed Hattie (Deidre Hall) is pretending to be Marlena, but only a select few know as they are trying to protect a comatose Marlena. Shawn D (Brandon Beemer) and Rafe (Galen Gering) are suspicious that Hope (Kristian Alfonso) planted evidence just to get Ben (Robert Scott Wilson) out of Ciara’s (Victoria Konefal) life.

CBS’ Y&R dropped 73,000 in total viewership but remains at the top with 3, 950,000 total viewers. The CBS soap opera also lost 17,000 women viewers 18-49. Exes Victoria (Amelia Heinle) and Billy (Jason Thompson) have an angry confrontation about his gambling addiction, where he is extremely harsh with her. Long-time friends, Ashley (Eileen Davidson) and Neil (Kristoff St, John) fall into bed together, is this the beginning of a romantic relationship for them?

Summer (Hunter King) makes a confession to Phyllis (Gina Tognoni), who is now concerned about Billy’s welfare. Victor issues a warning to Jack (Peter Bergman), but learns he isn’t interfering rather looking for answers about his biology. Devon (Bryton James) has a beautiful surprise for Shauna (Camryn Hamm). Just as Traci (Beth Maitland) sets up an intervention for her younger brother; her older brother gets the news that his bitter rival agrees to a DNA test.

ABC’s GH fell after such a high the previous week. The ABC sudser lost 90,000 viewers, leaving them with 2,321,000 total viewers this week, but lost the least amount (-12,000) of viewers among women aged 18-49. The word continues to spread among adults about Oscar’s (Garren Stitt) cancer prognosis), unfortunately, Cam (Will Lipton) also finds out and during an argument with him, he blindsides Oscar with the news. Robin (Kimberly McCullough) comes back to Port Charles wanting to meet Peter (Wes Ramsey), not sure how she feels about it all. Lucy (Lynn Herring) is surprised by Kevin’s (Jon Lindstrom) invitation.

Kim (Tamara Braun) continues to keep Julian (William deVry) in the dark, insisting on their relationship being only casual. Maxie (Kirsten Storms) feels conflicted about Peter, but won’t reveal anything to a nosy Nina (Michelle Stafford). Valentin (James Patrick Stuart) refuses to give up on his search for Nina’s biological daughter and receives a promising update from Curtis (Donnell Turner). Kiki (Hayley Erin) and Griffin (Matt Cohen) learn they are neighbors and share some intense moments, which cause Ava (Maura West) to plot vengeance. Lucas (Ryan Carnes) and Brad (Parry Shen) receive scary news about their son, Wiley.

Xander (Adain Bradley) becomes the newest model for FC, which only increases Emma’s (Nia Sioux) jealousy. Sally (Courtney Hope) is all business, and appears to be unfazed by Hope’s (Annika Noelle) rage that she will now be designing for Steffy (Jacqueline MacInnes Wood). Wyatt (Darin Brooks) and Liam (Scott Clifton) disagree over Bill’s ability to be a father and both are served subpoenas for opposite sides of the custody case. Ridge, knowing Bill would play dirty, gets devious taking measures that Judge McMullen (Joe Lando) will rule in Katie’s favor. Brooke defies Ridge’s wishes and meets with Bill in secret, revealing Thorne and Katie’s plan to wed before the wedding and agrees to support Bill!

How do you feel about the stories that happened this week and how would you rate all of the daytime soap operas? Please let us know what you think!