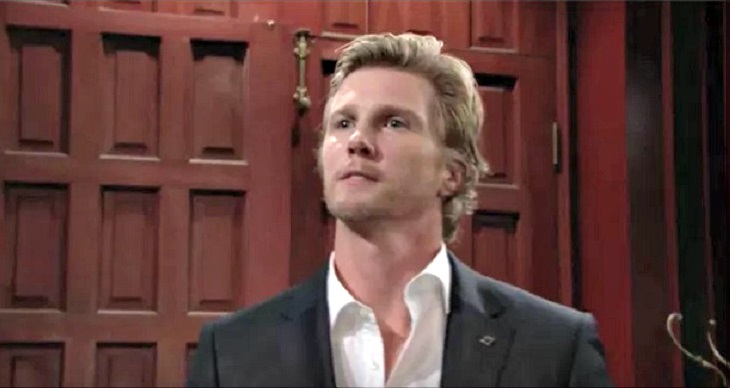 J.T. (Thad Luckinbill) is a middle-aged man on ‘The Young and the Restless’. No longer the guy that every young woman in Genoa City adores. Mr. Hellstrom has settled down as of 2018. Today’s J.T. has a heart condition, which necessitated use of prescription medication and its advised side effects.

One wonders whether Luckinbill is staying longterm, or will only be part of the cast through February, or March, as he initially advised could prove true? J.T.’s storyline does feel rushed in at least two major ways.

First, he and Victoria (Amelia Heinle) bonded very quickly. Vickie has acted impulsively in matters of the heart in the past, as Travis (Michael Roark) proved awhile back. But J.T. is in his own category, due to ‘JTV’s’ past marriage and their child, Reed (Tristan Lake Leabu).

Related: The Young And The Restless News: Darnell Kirkwood Returns To Y&R

Secondly, the flashback to J.T.’s electrocution instantly addressed his use of pills, which were momentarily teased as a potentially hidden issue. He told Vickie why he’d been to the hospital and the resultant need for his prescription.

Both issues could have been stretched for months. But Y&R opted to promptly answer any questions audience members had. That would be unusual, unless this returned character won’t be staying.

Considered under the context of a limited-run engagement, Luckinbill’s character would need to be briskly written toward multiple storyline climaxes, as seems to be the case. However, will a return to Mackenzie (Clementine Ford) or some other exit strategy become J.T.’s endgame?

Executive producer and head writer Mal Young surely wouldn’t kill this character off, right? Some type of faked death, or presumed demise would seem ill-fitting for this particular fictional persona as well.

It would be nice to see Luckinbill remain with the cast longterm. As with all strong actors and well-written characters, J.T.’s return felt seamless. It was as though he was gone for months, rather than seven years.

There are plenty of adventures that he could pursue and plenty of love-line that ‘JTV’ could explore as 2018 and beyond unfolds. For both reasons, here’s hoping Luckinbill and Y&R agree to continue this reunion indefinitely.