General Hospital: The Nelle And Brad Baby Switch We All Saw Coming – Who Will Expose Wiley Truth? 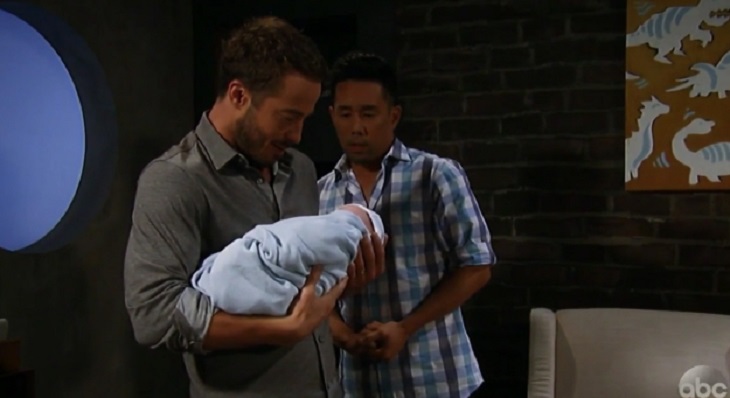 Fans are up in arms over the death of Brad (Parry Shen) and Lucas’ (Ryan Carnes) adopted baby on General Hospital.  It is not like this is a rare soap occurrence.  Sadly, this is a real life issue and soaps play this one out all that time.

Babies Have Died On-Soaps For Decades

One of the first baby deaths I remember on a soap was D.J. on Days of Our Lives.  This baby died in the late 70s or early 80s, the son of Marlena (Deidre Hall) and Don Craig (Jed Allen).  It was written as a SIDS death to bring awareness to the issue.  Of course, the baby’s death brought an end to their marriage as well.  Soaps use this storyline for angst all that time.

Most of us will never forget Sonny (Maurice Benard) listening to his baby’s life slowly pass away when Carly (Laura Wright) had abruptio placentae.  There was nothing that could be done to save that baby.  Jason (Steve Burton) grieving over baby Lila was another heart wrenching one.  Jake (Edward and James Nigbor at that time) dying on the operating table as Jason watched.

Bo (Peter Reckell) and Hope’s (Kristian Alfonso) son Zack ran over by his sister. Billy Abbott’s (Billy Miller then) daughter on Y&R.  B.J. Jones (Brighton Hertford) on General Hospital.  Tea’s (Florencia Lozano) baby that was replaced by Danny Morgan. Eli (Lamon Archey) and Lani’s (Sal Stowers) baby on Days of Our Lives.  All of these children belonged to characters that fans are attached to.  These children were not a day player from parents we didn’t know.

Brad And Lucas Wanted This Baby

Sam and Jason had baby Hope for a while before she was taken.  Lucas and Brad didn’t deserve to have that happen either.  Brad handled this wrong but his heart is in the right place.

Seriously, anyone who has watched soap operas saw it coming.  Most of us assumed another baby wouldn’t even be involved.  General Hospital’s Nelle had gotten too friendly with Brad for no apparent reason.  This is what lead seasoned viewers to suspect this months ago.  Typical soap storylines happen over and over, no one should really be surprised.

Just as we suspected this happening, we know it will come to an end.  Too many people saw the first baby.  The birth mother still has time to change her mind. Viewers need to let this play out, this isn’t the first or the last child death on a soap opera.  No real babies were harmed in the making of this show.