General Hospital Spoilers: Will Sonny And Carly Use Ava’s Legal Woes To Get Full Custody Of Avery? 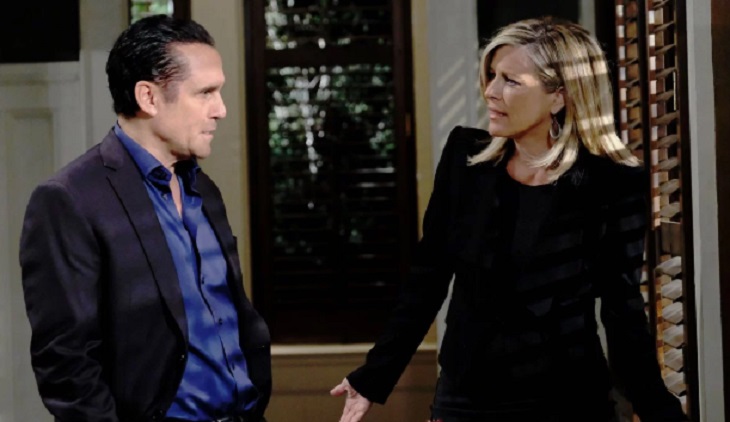 Ava will definitely have legal troubles, although she doesn’t know it yet. In Friday, November 30th’s episode, she had snuck into the Port Charles Police station interrogation room, toting a gun, ready to make Griffin Munro (Matt Cohen) pay for her daughter Kiki Jerome’s (Hayley Erin) murder!

General Hospital Spoilers – Ava’s Got Some Explaining To Do

That’s at the very least a charge of communicating threats, especially if police personnel witness it! She may be grieved out of her mind, but doesn’t she realize that there are probably cameras showing and recording the whole thing? How does she think police get evidence from interrogations? More importantly, how did she get in there in the first place-by breaking and entering into a police station?

Other General Hospital spoilers tease that suspicion will shift from Griffin to Ava for Kiki’s murder because of this, among other factors. Previews of Monday, December 3rd’s episode indicated Sasha Gilmore (Sofia Mattsson) is questioned by Detective Harrison Chase (Josh Swickard) about what happened to her thanks to Ava Jerome regarding being drugged, stripped naked, and put in bed with Griffin, who had also been stripped naked and knocked out, for Kiki to find!

That could add two kidnapping charges or at least two charges for Ava of holding them against their will, and assault and battery of Griffin! Now that Kiki has been murdered and Griffin remembers Ava telling him he would “get a monster” any thought of not pressing charges should fly out the window!

Valentin Cassadine (James Patrick Stuart) and Nina Reeves (Michelle Stafford) both will encourage Sasha to also press charges against Ava, although she probably won’t need too much prodding in that direction!

General Hospital spoilers also show Carly telling Sonny and Jason Morgan (Steve Burton) that they have the leverage they need! Could this be leverage to get sole permanent custody of little Avery?

Ava is vulnerable… and Ryan knows it. What is his plan for her? Tune into a thrilling, new #GH – STARTING NOW on ABC! @MauraWest @thejonlindstrom pic.twitter.com/rX1qJD7yM6

No family court judge in his or her right mind would grant a mother who possibly murdered her older adult daughter to retain custody of a toddler! Stay tuned to GH and keep watching General Hospital spoilers to see what happens down the road!