General Hospital Spoilers: Who Is Anna’s Driver Working For – Valentin, Liesl, Or Someone Else? 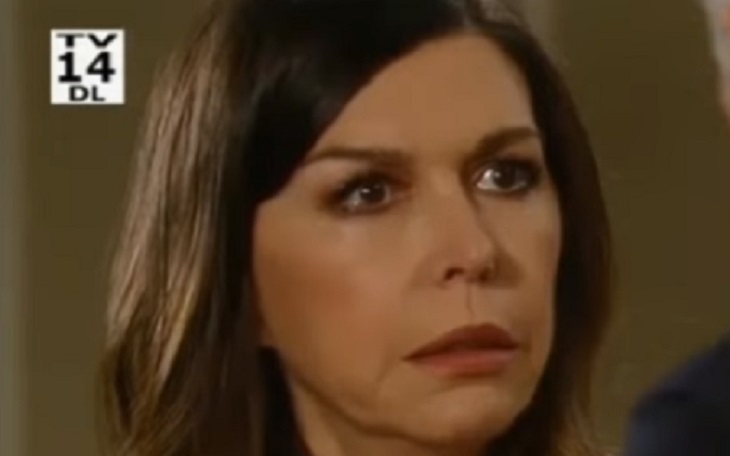 General Hospital spoilers indicate Anna Devane (Finola Hughes) is obviously in trouble, but who sent the gun toting driver for her?  Was it Valentin Cassadine [James Patrick Stuart], Liesl Obrecht [Kathleen Gati], or someone else entirely?

After Nina (Michelle Stafford)  accused Valentin (James Patrick Stuart) of just being worried about Anna, she leaves him to go hunt down Liesl (Kathleen Gati) and Valentin makes a mysterious call. This makes it look like Valentin may be the one after Anna, but why?

General Hospital’s Anna knew nothing about Peter’s (Wes Ramsey) whereabouts and isn’t actively looking for him at the moment, she wants to patch things up with Robin.  Valentin seems to sense that something is up with Nina, so having her followed would make a lot more sense than kidnapping Anna.

General Hospital spoilers indicate Valentin could save Nina from prosecution for kidnapping and torture and save Peter in the process. Valentin already pointed out that he saved Nina from the Cassandra (Jessica Tuck) mess Valentin is not likely to put Anna over Nina when he’s trying to save his marriage.

During their last conversation on General Hospital, Liesl made it plain to Anna that they still have unfinished business.  Liesl now wants Peter to write a book with his confession.  Could it be possible that Liesl has Anna kidnapped to get revenge on both Anna and Peter?

Suppose Peter writes the book and his mother is killed in the end, just like Faison was.  Liesl could kill Anna herself or even force Peter to do so in the name of revenge.  It’s obvious that Liesl still hates Anna and probably blames her for Nathan’s (Ryan Paevey) death because her son was directly involved.  Liesl seems to be losing what little grip she does have on reality and she has kidnapped before so it is possible that she set this up.

When Anna’s disappearance is discovered, Peter is going to be the obvious choice, at least to Jason (Steve Burton).  However, we know that isn’t possible because he’s been tied up for a while now. Everyone knows who Peter is now and who his parents are, could Peter have an unknown enemy who took Anna?

Although Peter’s parentage is now common knowledge, his hatred for Anna isn’t.  With Peter being an international criminal it is very plausible that an unknown kidnapper could be involved and want to use Anna to draw out Peter. Also , since the writers seem to be trying to redeem his character, this could be a catalyst to Peter having a relationship with his mother and his sister Robin (Kimberly McCullough).

It will be interesting to see if the culprit is the obvious, or if there is some strange villain who has Anna.  Hopefully, this story will wrap up faster than most have so far.

The Young and the Restless (YR) Spoilers: Cane Rightfully Threatened – Jack Chancellor Will Force Him Out