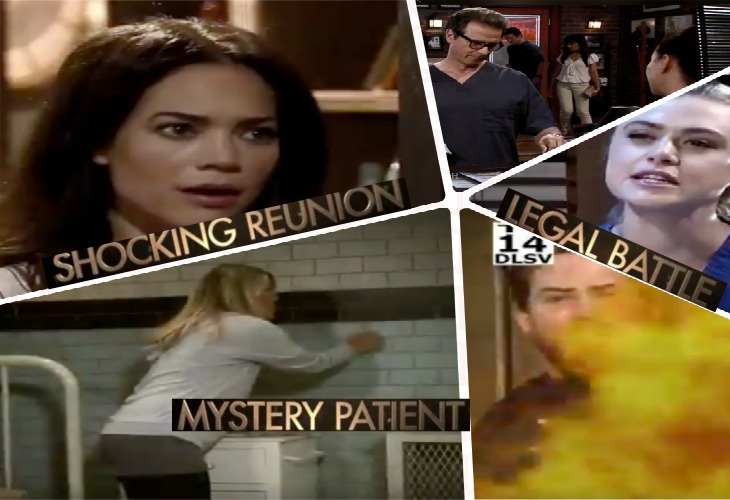 General Hospital (GH) spoilers tease that this week Port Charles is on fire.   By on fire they mean Peter’s  (Wes Ramsey) room in the cabin is ablaze.  Peter is in danger!  Could Dr. Obrecht (Kathleen Gati) have decided she is ready to take a more drastic move?

Meanwhile, GH Chase (Josh Swickard) works off his frustration in the gym, could his case against Nelle (Close Lanier) strike the boiling point? Chase has one goal and it’s to take Nelle down, will discoveries in Carly’s case give him the needed evidence to finally get justice for Zack?

In the General Hospital promo Jason (Steve Burton) looks totally frustrated.  Does this mean that Jason has been found out at Ferncliff. Will Jason and Spinelli (Bradford Anderson) ever catch a break and finally free Carly (Laura Wright)?

Carly discovers a mystery patient, will she get herself in more hot water trying to help? Will Morse code reveal the identity of the mystery patient? Carly is likely to make herself more of a target trying to help another victim of Mary-Pat (Patricia Bethune) and Ferncliff. Kevin (Jon Lindstrom) seems to be involved as well, what are the secrets of the maximum security ward?

Kiki’s (Hayley Erin) lawsuit against Dr. Bensch (James DePaiva) puts her in the hot seat as Alexis and Scott (Kin Shriner) face off with their respective clients. Now that Francesca has joined the fight, will Alexis be able to expose Dr. Bensch for the predator he is?

Elizabeth (Rebecca Herbst) gets a shocking surprise, has a family member shown up for her wedding after all? Franco (Roger Howart) has contacted not only Sarah, but Jeff and Andrea as well. Hayden and her baby could make an appearance too. Get ready General Hospital fans there is sure to be drama no matter who shows up for this wedding.

Of course, fans will just have to tune in to find out what will happen next!

Summer is heating certainly heating up in Port Charles.