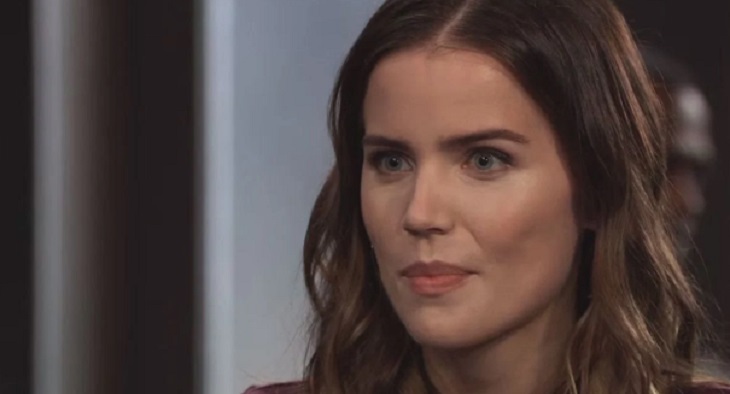 General Hospital spoilers tease that once again Valentin Cassadine (James Patrick Stuart) will need to convince Sasha Gilmore (Sofia Mattsson) to stay around Port Charles a bit longer. General Hospital viewers can’t really blame her for wanting to leave town right away, considering the things that have happened in the last couple of days.

First Sasha was drugged, stripped, and put in a bed with Griffin Munro (Matt Cohen) who was knocked out and stripped also, by none other than Ava Jerome, (Maura West) the mother of her “half-sister” Kiki Jerome (Hayley Erin)! And now Kiki’s been murdered and Griffin’s been accused of the murder in a frame-up!

True, Sasha wasn’t really Kiki’s half-sister but a friendship had started to emerge, and the friendship with Nina Reeves (Michelle Stafford) seems to be blossoming. Those things are not fake, even if Sasha is, unknown as yet to Nina. Sasha is rattled and frightened of the things happening around her, so of course she wants to get away from Port Charles!

Valentin has gone from telling her to leave to encouraging her to stay before, and he will likely encourage her to stay again. He and Nina have pledged to take care of any legal fees involved because of police questioning about the “bizarre set-up” as she called it, set up by Ava.

Nina will do anything to protect the young woman she believes is her daughter, and Valentin will want to protect her also. Nina may lean towards police protection, while Valentin may seek protection for Sasha from spy world contacts. Valentin himself may even offer to guard Sasha, insisting she move into Wyndemere for a time until everything blows over with the serial killer threat.

Of course, Nina will want to stay close also, so this whole situation may work to Valentin’s advantage in regaining not only Nina’s trust, but her moving back into Wyndemere with him, Sasha, and Charlotte (Scarlett Hernandez) too! Keep watching GH and checking General Hospital spoilers frequently to see what develops!

General Hospital Spoilers: Sam’s Past Comes Back To Haunt Her – Leland Powell Resurfaces