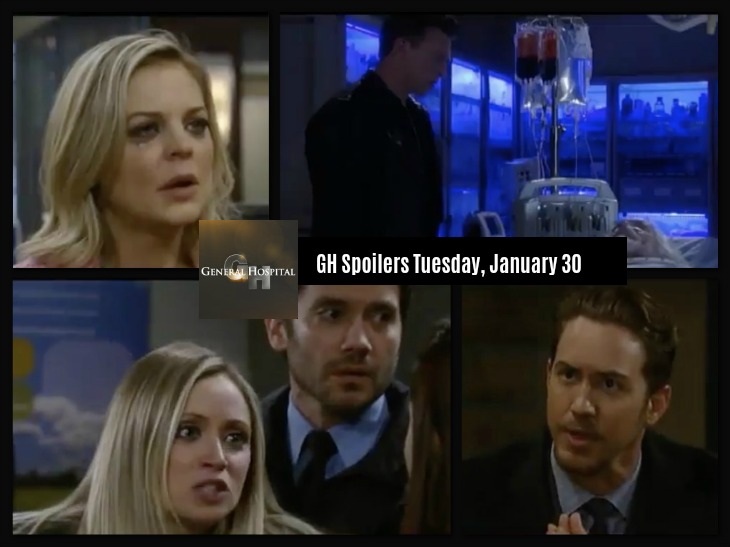 General Hospital (GH) spoilers for Tuesday, January 30, 2018, are filled with plenty of exciting confrontations, questions and demands. Friends fight for each other, while enemies work for a common goal. Will justice finally come to fruition? GH fans definitely do not want to miss out on all the drama happening on Tuesday’s episode!

General Hospital’s spoilers reveal Maxie Jones (Kirsten Storms) pleads with Dr. Griffin Munro (Matt Cohen) in front of Nina Reeves (Michelle Stafford) and Valentin Cassadine (James Patrick Stuart); she tells Griffin she wants to see her husband, Detective Nathan West (Ryan Paevey) and she needs to be with him. Will Griffin let her see him?

Related: Jim Harvey Has Some Tricks Up His Sleeve – Kills Betsy, Frames Franco

Also at GH, Dr. Hamilton Finn (Michael Easton) finally admits to Anna Devane (Finola Hughes) that he is ready to see where “this” goes. Is Anna willing to take the leap of faith with Finn?

Something about Peter’s story doesn’t add up. And Jordan’s going to need to know exactly what led to her detective being shot. #GH STARTS NOW on ABC! pic.twitter.com/5CI5ZhH8jT

GH sources show Peter August (Wes Ramsey) meets with Sam Morgan (Kelly Monaco) and her husband, Drew Cain (Billy Miller) at their condo. He advises them, the only way to control this story is for them to get in front of it and “own it!” Will they take his advice?

A very distraught Lulu Falconeri (Emme Rylan) is being comforted by her husband, Dante Falconeri (Dominic Zamprogna) as she angrily tells a nurse that the woman in the hospital room, sobbing, is her best friend; and she is desperate to be with her. Is it the hospital refusing Lulu from being in there, or is Maxie too angry, blaming this entire situation on Lulu and the article that led to this disaster?

General Hospital spoilers reveal Dr. Liesl Obrecht (Kathleen Gati) is ranting that it is time Cesar Faison (Anders Hove) is brought to justice; but strangely it is Anna Devane (Finola Hughes) who is holding her back! Meanwhile, Jason Morgan (Steve Burton) has managed to find his way to Faison’s room and is GH fans see him leaning over Faison, demanding to know, why he replace him with his brother Drew. Will Faison ever reveal the truth to Jason?

Be sure to tune into ABC’s General Hospital (GH) on Tuesday, January 30, 2018 to catch up on all these exciting stories and so much more happening right now in Port Charles. Check Soap Opera Spy often for updates, news, rumors and spoilers!