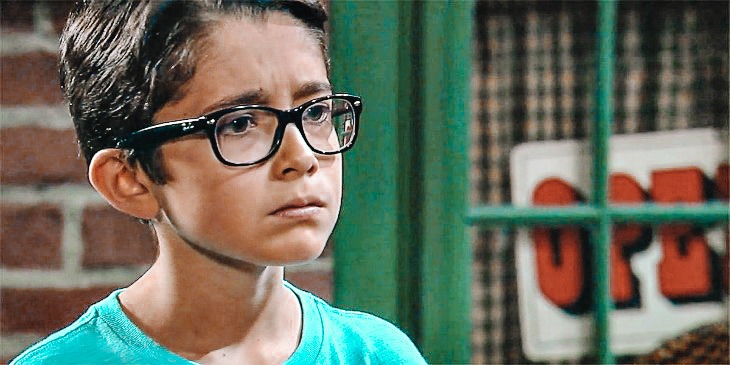 General Hospital spoilers tease that Spencer Cassadine (Nicholas Bechtel) has a grand plan to take down his great-uncle Valentin Cassadine (James Patrick Stuart) and it involves going undercover…well, sort of! Spencer concluded at the end of his argument that Sasha Gilmore (Sofia Mattsson) interrupted that he felt like he was supposed to go back to school in France.

This may be true, considering he only had a spring break. However, it’s much more likely he was bluffing Valentin because he wants him to THINK he’s returned to France and to school so he can complete his grand plan under the radar!

Spencer wants to avenge his father Nicholas Cassadine (last portrayed by Nick Stabile) and win back his inheritance as the last TRUE living Cassadine. He doesn’t consider Valentin as a true Cassadine and views him as a fraudulent interloper out to steal what’s left of the Cassadine money.

The fact that he stayed cool as a cucumber when Sasha entered the room and didn’t even blink at her strong resemblance to his would-be mother Britt Westbourne (Kelly Thibaud) shows that he is no longer a precocious child but a young man who has grown up having to keep a lot of secrets and acting accordingly. Like the rest of the Cassadines, he also possesses a conniving side and he plans to use it against Valentin in whatever way he can to take him down!

As witnessed by Spencer’s ability to hack into the Port Charles computerized voting system and insert a virus…a cute one, but still a virus…he is one very smart little man. He may be smart enough to find – or create – a paper trail via computer to prove Valentin is not who he claims to be, but merely some imposter who stole the real Valentin Cassadine’s identity!

Spencer likely finds suspicious that Valentin showed up out of nowhere only after Helena Cassadine (Constance Powers) died and the Cassadine money was supposed to go to the only living male heir, namely himself!

Other General Hospital spoilers have teased that there could be several male Cassadine heirs who are not as dead as supposed….among them Spencer’s father Nicholas! Valentin has mentioned several times that Nicholas has never been proven dead, and even Valentin isn’t cruel enough to let Spencer go on thinking his father is dead if he knows he’s not.

But if he is alive, and Valentin helped him fake his death and Spencer knows it, he still doesn’t want Valentin to have the family money and would do almost anything to get it back from him!

Stay tuned to GH and keep checking General Hospital spoilers frequently to see the truth come out, as it always does!