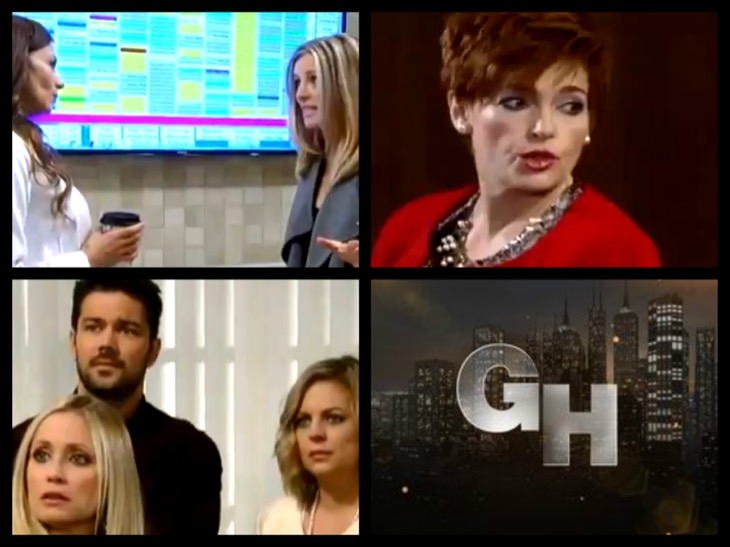 General Hospital (GH) spoilers for Monday, January 15, 2018, bring out a lot of questions and confrontations while some step into new territory and others attempt to prevent disaster. Harsh words are exchanged and goodbyes are said. Monday’s episode is one GH fans will not want to miss!

General Hospital spoilers reveal Dr. Hamilton Finn (Michael Easton) comes to see Anna Devane (Finola Hughes) and says that he never really got to say “goodbye” to her. Is this the end of the couple, or just the beginning?

Peter August (Wes Ramsey) returns to the Crimson office, where Maxie Jones (Kirsten Storms) and Nina Reeves (Michelle Stafford) are furious with Lulu Falconeri (Emme Rylan) for publishing that Cesar Faison (Anders Hove) is Nathan West’s (Ryan Paevey) biological father, knowing the dangers it could bring them. Peter tells them, they are all right in what they are saying about Lulu; is Peter there to destroy Lulu, or will he defend her actions?

GH sources show Ava Jerome (Maura West) comes to Charlie’s Pub and questions her brother, Julian Jerome (William deVry), wanting to know what is going on with Alexis Davis (Nancy Lee Grahn), who is also seen at the pub.

Josslyn Jacks (Eden McCoy) is at Kelly’s with her boyfriend, Oscar Nero (Garren Stitt), asking him if they are really going to do this. Meanwhile, after discovering a box of condoms in Joss’ purse, an angry Carly Corinthos (Laura Wright) confronts Dr. Kim Nero (Tamara Braun) and orders her to tell her son, Oscar to take a cold shower because she is sure he is the instigator in all this.

General Hospital spoilers tease that Diane Miller (Carolyn Hennesy) meets with client Sonny Corinthos (Maurice Benard) and Jason Morgan (Steve Burton) and suggests they tell their lawyer what they have been up to.

Be sure to tune into ABC’s General Hospital (GH) on Monday, January 15, 2018, to catch up on everything happening in Port Charles right now. Check Soap Opera Spy often for updates, news, rumors, and spoilers!