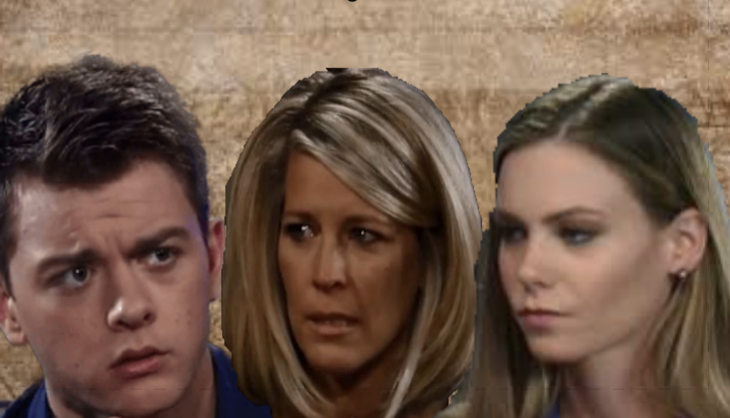 General Hospital (GH) spoilers indicate that Michael (Chad Duell) is finally making his move to help his Mom. Nelle (Chloe Lanier) might have gotten away with her schemes up until now, but Michael is about to turn the tables on her. He won’t let her get away with her nefarious plot to make his mom Carly (Laura Wright) disappear!

According to ABC Soaps in Depth, Michael has finally wised up. He’s not going to let Nelle get away with her lies anymore, especially after what she did to his mother Carly.

Nelle accused Carly of pushing her down the stairs at her baby shower at the Quartermaine mansion, which she clearly didn’t do. And now Carly has to pretend that she’s mentally insane in order to stay out of jail!

Chloe Lanier, who plays Nelle on the highly rated soap, puts it this way, “Nelle has justification for everything she does. In her mind, the only way to get to Michael was to get Carly out of the way – no matter how painful it might be for the Corinthos family. They’ve inflicted enough pain on her. She doesn’t care anymore!”

In one way, Michael has to support Nelle. After all, she just gave birth to his baby. But the wool has finally been pulled away from his eyes. Fans will see a shift in Michael’s character. He’s going to be more calculating and he’s definitely not going to be the supportive hero he’s been so far. As a matter of fact, Nelle might want to watch her back as Michael will definitely have something in store for her!

General Hospital airs every weekday on the ABC network. You’ll have to check your local listings for times. Let us know what you think by leaving us a line with your thoughts in our comments section below.

And as always, don’t forget to come back to Soap Opera Spy for all the latest news, updates and spoilers on General Hospital and all of your favorite daytime television shows right here!

The Young and the Restless (YR) Spoilers: Nikki Forced To Help Nick – Sharon Blackmails Her