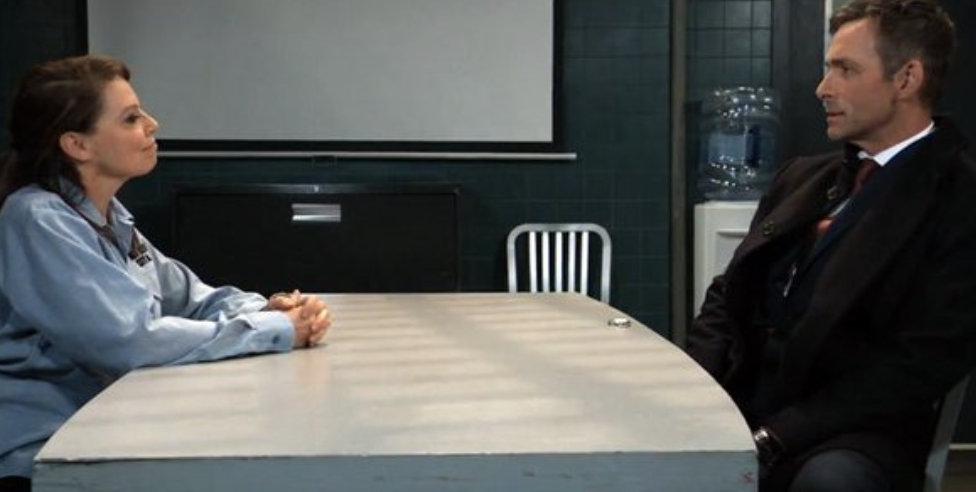 It’s possible that he did, but Liesl’s asking him why he would believe anything Madeline told him showed that she was bluffing. For one thing, Valentin could not have faked the money trail that Curtis Ashford (Donnell Turner) followed to Sasha, and Curtis took his own DNA sample from Sasha and sent it to an independent lab. Valentin could not have faked Nina’s hospital records either that Curtis dug up for him. So there’s more to the story than what Liesl threatened him with and she knows exactly how much more, even though she didn’t reveal it to him!

Valentin probably did take a sample from Madeline, but that could be because he wanted to be sure that any DNA match would not only match Nina but Madeline as well..that would make an undeniable chain of maternal DNA. But all Valentin has is his word against Liesl’s, and no proof that he didn’t take the DNA from Madeline in order to fool Nina!

Peter has Valentin's life in his hands, West Coast. But will he even consider letting Obrecht off the hook for holding him hostage?
A brand-new #GH starts RIGHT NOW on ABC! @wesramsey #GH55 pic.twitter.com/AEP3kV1DOB

There is just too much family resemblance to both Liesl and Britt Westbourne (Kelly Thiebaud) for Sasha to not be a close relative of theirs, and so also to Nina. But if Liesl told Nina she saw Valentin take the DNA from Madeline to fake a match to Sasha, Valentin knows that Nina distrusts him just enough to believe Liesl over him, and he just cannot take that chance!

GH Spoilers – How Far Will Valentin Go To Shut Liesl Up?

Will Valentin be able to keep Liesl from outing him to Nina by getting the information he can blackmail her with? He called Peter August (Wes Ramsey) for help, and that may be to get more incriminating information on her that Peter may know of, having been raised by Cesar Faison (Anders Hove) and possibly witnessing Liesl chasing after him for many years!

Bold and the Beautiful Rumor: Reese Playing Taylor, Obsessed With Her, Turns Dangerous