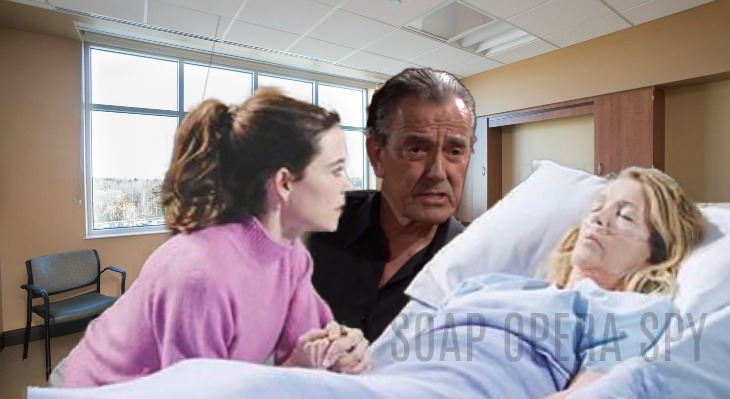 Just prior to Nikki (Melody Thomas Scott) forging an alliance with Mia (Noemi Gonzalez) she became friends with the bottle, again, on ‘The Young and the Restless’. That reckless rebound turns into a shocker on Y&R, as Reed (Tristan Lake Leabu) mows down his grandmother with Charlie’s (Noah Alexander Gerry) car on the streets of Genoa City.

Wow, plenty of plot was packed into the lead paragraph to this feature. Of course, that intro doesn’t compare to the bounty of J.T. (Thad Luckinbill) related scenes that continue to be presented to Y&R viewers eight months after that character’s supposed death.

Y&R Spoilers – Nikki Becomes A Victim To Have Victor Return

Part of the reason why Nikki becomes a victim, again, is to fuel Eric Braeden’s (Victor) return. The thirty-eight-year cast veteran is said to have been away throughout the fall as part of his trip abroad to see friends. Longtime fans are hoping the show hasn’t offered reduced script time to its leading man, which spurned said voluntary vacation. However, various other cast changes and contract status reductions make this point worth pondering.

Next week on #YR, Nikki gets drunk, walks out of the GCAC & gets hit by Reed, driving Charlie’s car because Charlie drank. They don’t see her and leave her in the street. A passerby finds her. Nate recognizes her at the hospital, does surgery & says he’s not sure she’ll survive. pic.twitter.com/83Zrte22WK

Victor is currently out of touch for unknown reasons. He had been working abroad in Dubai, which is where Summer (Hunter King) just relocated to. She did so at the behest of her grandfather.

Nikki’s inability to make contact with her one true love in the days leading up to the accident Reed initially doesn’t realize he causes wasn’t coupled with a natural request, which seemed odd. Viewers naturally wondered why Summer wasn’t contacted and able to provide details about her interactions with Victor, if there were any.

Regardless, all of the past week-plus proceedings were intended to write Reed back in, establish the Nikki-Mia link, put Nikki in the hospital, have Victor return, and (hopefully) begin to wrap a compelling storyline about J.T.’s assumed death.

So, connected characters and fans will now learn what the ‘Moustache’ knows about the cover-up crew if anything. With whatever that answer, Victor will begin correcting matters related to his family starting on Christmas Eve.

MUST WATCH General Hospital Preview Video Monday, December 17: Jason Tells Sam All He Wants For Christmas Is To Be With Her – JaSAM Reunion?