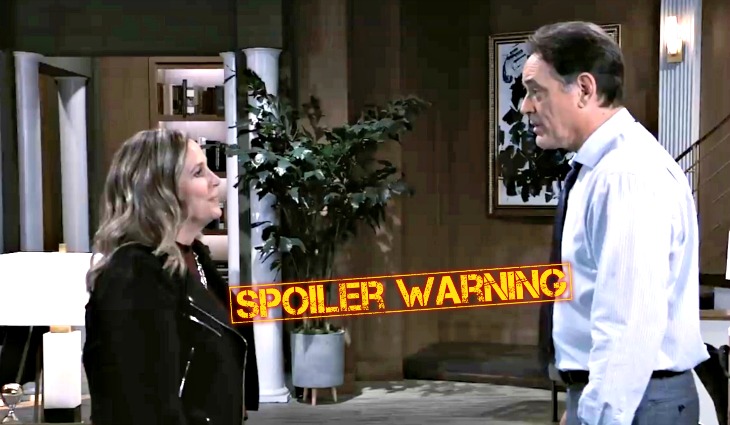 “General Hospital” spoilers tease that Laura (Genie Francis) will finally arrive back in Port Charles. She’ll return for a fun Friday cliffhanger, but the real GH drama will begin on October 1. That’s when Laura will size up Ryan’s (Jon Lindstrom) version of Kevin. She’ll notice some crucial differences right away, so Ryan will have his work cut out for him.

Laura will expect a warm welcome from her hubby, but she won’t exactly get one. Ryan will be shocked by Laura’s return. Since she didn’t call with a warning, Ryan will be left wondering what to say and do. He thought he had more time to prepare for the role of doting husband.

Naturally, Laura will think “Kevin” seems off. She’ll worry about his odd reaction, but he’ll insist that he just had a trying day. That’ll satisfy Laura somewhat, but she’ll want to know the details. Laura’s always looking out for Kevin and his needs! She’ll hope to support him through any struggles he might have.

Of course, Ryan won’t want to get tripped up. He’d rather ask Laura about herself and avoid too many questions. Ryan will also inquire about Laura’s luggage, which will be out in the hall. He’ll go to grab it, so that’ll be a nice save. Kevin would certainly be helpful in cases like this, especially when Laura’s tired after a long trip.

“General Hospital” spoilers say Laura will mention Spencer (Nicholas Bechtel), who’s recovered and wanted her back in PC. The kid’s style was cramped, so Laura took her cue to leave. She’ll be ecstatic about her chance to reunite with Kevin. Too bad the real one’s stuck in Ferncliff!

Ryan will wonder how long Laura intends to remain in town, but he won’t like her answer. Laura will admit she’s here to stay. She’ll plan to stick around Port Charles forever, so Ryan will need a new game plan. A nosy wife could definitely interfere with the chaos he’s cooking up.

It should be fun to see Genie Francis as Laura again. “General Hospital” viewers have missed her, so let’s hope this return is truly permanent. We’ll give you updates as other news and rumors emerge. Keep watching ABC’s GH and don’t forget to check Soap Opera Spy often for the latest “General Hospital” spoilers, rumors, updates and news.