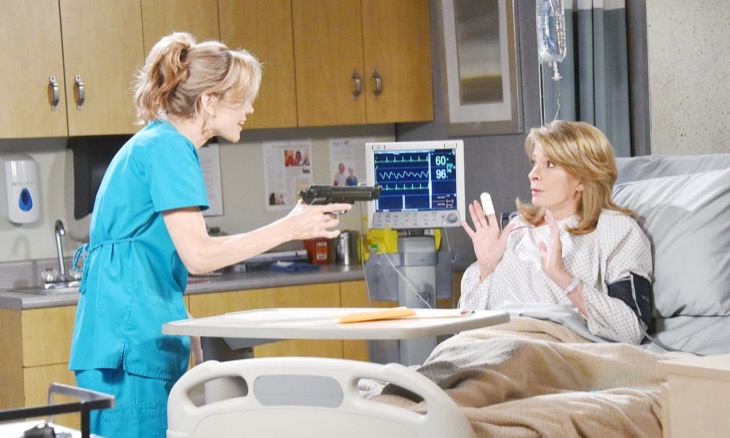 Days of Our Lives (DOOL) spoilers tease that Kristen (Stacy Haiduk) will not give up her quest to find and eliminate Marlena (Deidre Hall). She’s hell-bent on killing Marlena, and she’ll stop at nothing to do so. After some alone time in the DiMera tunnels, she’ll venture forth and head straight for the hospital to finish Marlena off.

Kristen will first encounter Hattie (Deidre Hall), who’s posing as Marlena. Gun drawn, she’ll threaten “Marlena” and the two will have a tense interaction, but soon Kristen will learn that she’s actually dealing with Hattie and that the real Marlena is elsewhere.

Kristen will leave to go hunt down Marlena, but unfortunately Hattie won’t see fit to divulge to anyone that Kristen paid her a visit. That’ll leave Kristen free to go find Marlena in the under-construction wing of the hospital.

Eventually, Kristen will find Marlena, who will have just awakened from her coma. Days spoilers say that Kristen will taunt Marlena and wave a gun around, threatening to finish her off. It won’t be a good scene, especially since Marlena will be in such a weakened state.

But fortunately, Kayla (Mary Beth Evans) and Roman (Josh Taylor) will enter the room, and they’ll be shocked to witness the scene unfolding in front of them. Roman will jump into action and attack Kristen, causing the gun to discharge and part of the ceiling to cave in. Kayla will grab the gun, and Kristen will flee the scene.

Soon thereafter, John (Drake Hogestyn) will arrive on the scene, shocked to see both the aftermath of all the Kristen drama and Marlena awake. He’ll be horrified that Kristen was there and threatened Marlena, but he’ll also be overjoyed to find Marlena safe and alert. John and Marlena will enjoy a nice reunion, but Kristen will still be on the loose and dangerous.

Do you think that Hattie will get in trouble for withholding information about Kristen’s murder mission? Stay tuned to DOOL and don’t forget to check Soap Opera Spy often for the latest Days of Our Lives spoilers, updates, and news.