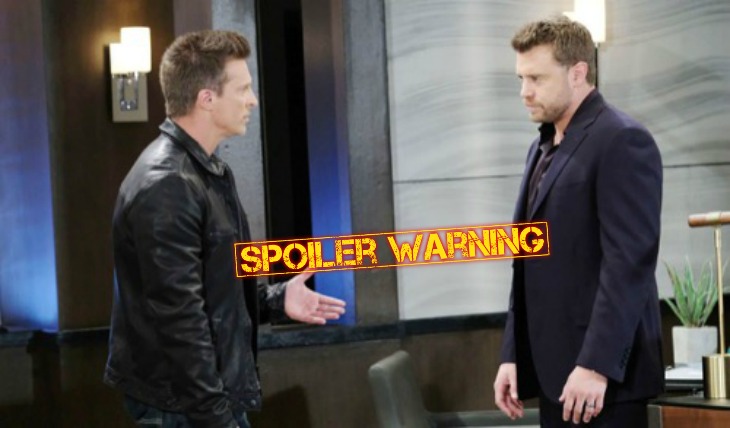 General Hospital (GH) spoilers for the week of Monday, December 10, 2018 through Friday, December 14, 2018 tease that we will have a week filled with a dramatic funeral, one has a chance of getting his memories back, and let’s not forget plenty of drama. We have a very exciting week heading our way and you will not want to miss a moment of the action!

This week, a memorial for Kiki Jerome (Hayley Erin) will take place which has been arranged by Julian Jerome (William DeVry), Franco Baldwin (Roger Howarth), and Scott Baldwin (Kin Shriner). Ava Jerome (Maura West) will be guilt-ridden and at first, doesn’t plan to attend the memorial, but will have a change of heart.

When Ava sees Griffin Munro (Matt Cohen) at the memorial, who shows up uninvited, it will cause her mood to change and she will start to lash out. Ava will pick a fight with Carly Corinthos (Laura Wright) and things will get ugly. As we all know Carly can definitely handle her own and will do so. You can expect to see plenty of drama at the funeral.

Missed an episode? Not to worry! Full episodes of #GH are just a click away: https://t.co/Cn9cJzQXKu

General Hospital Spoilers – Jason and Drew Have a Heart-To-Heart

Meanwhile, Drew Cain (Billy Miller) will be shocked when Margaux Dawson (Elizabeth Hendrickson) gives him the flash drive that holds his memories. Margaux will want to prove to Drew that she is not a bad person and will decide to quit holding the flash drive over his head. Drew recently decided that he did not want to restore his missing memories and lose the ones he has made in the last six years.

Drew will end up having a heart-to-heart with Jason Morgan (Steve Burton) and it brings them somewhat closer and could help them to start acting like brothers. Do you think Drew will have a change of heart and restore his memories?

Jason sits down w/Margaux.
M: If this is about Sonny..
J: It's not about Sonny. It's about Drew.
M: I haven't spoken to Drew in awhile.
J: Keep it that way. Investigate me all you want. Leave Drew out of it.#SteveBurton #GH pic.twitter.com/ATrlBhvFI6

Weekly GH Spoilers – For the other residents of Port Charles…

For the other residents of Port Charles, Carly Corinthos will pay a visit to Morgan Corinthos’ (Bryan Craig) grave. Nina Reeves Cassadine (Michelle Stafford) will be encouraged to give Valentin Cassadine (James Patrick Stuart) another chance. Kim Nero (Tamara Braun) will give Oscar Nero (Garren Stitt) his space. Sonny Corinthos (Maurice Benard) and Oscar will have a heart-to-heart.

Laura Spencer (Genie Francis) will confide in Lulu Falconeri (Emme Rylan). Cameron Spencer (William Tipton) will pay Julian Jerome a visit. Ava Jerome will receive a surprise visit. Stella Henry (Vernee Watson) will gain a little insight. As you can see we have a very eventful week coming up, so make sure to stay tuned to ABC’s General Hospital. Don’t forget to check often with Soap Opera Spy for all your latest spoilers, news, updates, and much more!