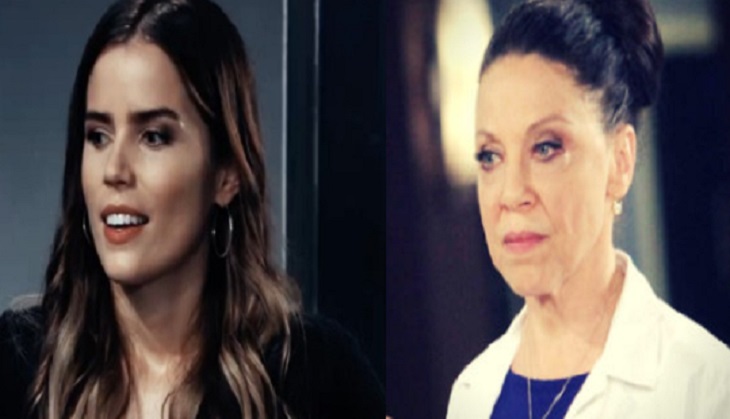 General Hospital spoilers tease that Dr. Liesl Obrecht (Kathleen Gati) could have been giving viewers a big hint when she was chastising Anna Devane (Finola Hughes) about how her daughter Robin Scorpio (Kimberly McCullough) was raised.

Long time General Hospital viewers will recall that Anna was not around very often when Robin was growing up, and Liesl made a crack about “at least she (Liesl) knew where all her children were!” Knew where ALL her children were, all TWO of them, or were there more?! Could Sasha Gilmore (Sofia Mattsson) be Liesl’s youngest, as other General Hospital spoilers have teased?

Britt Westbourne (Kelly Thibaud) has been in town for several weeks now on General Hospital, and Anna and Finn (Michael Easton) have convinced Dr. O that Britt has contracted “Tiber Pox”, a disease engineered by Cesar Faison (Anders Hove) and more than likely assisted by Liesl in development of it.

Of course, Finn only injected Britt with the common cold, although her symptoms seem more like the flu. She definitely doesn’t have the dreaded Tiber Pox that was in the blood sample. Finn inserted that after the blood was taken. Dr O. has been brought back to the PCPD where she demands to be taken to General Hospital to see Britt.

Many GH viewers have noted how Britt and Sasha are nearly dead ringers, and considering Sasha’s DNA is a 99% match to that of Nina Reeves, (Michelle Stafford) and yet NOT her daughter, Sasha has to be a very near relative to Nina.

No one ever thought to test her blood against Kiki Jerome’s (Hayley Erin) before her untimely death, although there must be blood samples in storage of not only Kiki but her father Silas Clay (Michael Easton). If their blood had been compared for DNA then they would not have been a match on the paternal side, therefore exposing Sasha as not being Nina’s birth daughter, although a very close relative.

General Hospital Spoilers – Britt And Sasha Have Been Kept Apart

Yet with Britt in town all this time, part of it outside the hospital, Britt and Sasha have never seen each other, and the subject of Nina, Britt’s first cousin, having found her birth daughter has never been brought up with Britt.  Now that Liesl is back in town also, will Liesl and Sasha encounter each other and the two obviously recognize each other, or did Liesl give Sasha up at birth?

Remember, Liesl said she always KNEW WHERE ALL HER CHILDREN WERE – so even if she had given Sasha to Madeline Reeves (Donna Mills) as she had her son Nathan West (Ryan Paevey), Liesl still would have known that Sasha was raised by a single mother in Chappaqua, New York!

Will Liesl be the one to bust Valentin Cassadine (James Patrick Stuart) and break her niece Nina’s heart? Or might Liesl blackmail Valentin to help her beat the charges for kidnapping and torturing Peter August (Wes Ramsey) with her information? That would put Valentin in an awkward position indeed! Stay tuned to GH and keep checking General Hospital spoilers frequently to see what happens!