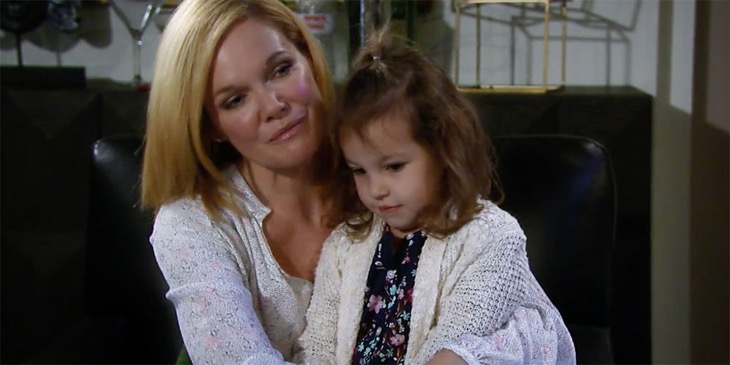 General Hospital spoilers tease that even though Ava Jerome (Maura West) was interrupted in her plans to kidnap her daughter with Sonny Corinthos (Maurice Benard), Avery Jerome Corinthos (Ava and Grace Scarola) in November 21st’s episode, she’ll jump at the chance if she gets another opportunity!

Ava was all set to pick up Avery and embark on a one way trip out of Port Charles and the country when Nina Reeves (Michelle Stafford) interrupted her to ream her out over giving Sasha Gilmore (Sofia Mattson) a roofie!

That probably made her late to “pick up” Avery and catch her flight as well. Then “Kevin” (Jon Lindstrom) arrived and of course, we know he’s really his evil twin Ryan Chamberlain. He broke the two up from a near fist fight and then convinced Ava to stay and gave her a passionate kiss to prove he wanted her to stay!

GH viewers know Ava will always want full custody of her flesh-and-blood toddler daughter, even if it would mean kidnapping her. She actually had won at least temporary full custody when Carly Corinthos (Laura Wright) was in Ferncliff and Mike Corbin (Max Gail) was still living in the Corinthos home full time and not in elder day care.

OMG – look at that mischevious grin on Ava’s face when Ryan intercepts Nina’s attacks. It is glorious.

Kevin to Nina: You just made a big mistake.

A few months ago I would be praying to soap gods that he chop her up. But Nina has been growing on me lately #GH pic.twitter.com/4Wwna7WMFp

She’d proven in court that it was not safe for Avery there when Mike was living there after he took Avery to the riding stables thinking she was his late daughter Courtney (Alicia Leigh Willis) as a small girl, even though Mike would not intentionally hurt her or put her in danger. It was the possible danger of being left in the care of an Alzheimer’s sufferer that convinced the court. But now that Carly’s home and Mike is not there full time, the custody has gone back to joint between her and Sonny.

If Ava gets another opportunity to kidnap Avery in the near future, Ryan may even think he can help by “eliminating the competition”. He’s already targeted Carly and set her up to be framed for the murder of Mary Pat Ingles (Patricia Bethune) although that has kind of backfired on him; the police don’t believe Carly did it and recognize she was set up by the real killer. Even though Ryan has targeted exclusively women in the past, it doesn’t mean he wouldn’t get rid of an inconvenient man in his way.

After all, he once beat up Steve Hardy (John Beradino) when he got in the way of his attack on Audrey Hardy (Rachel Ames) and tried to bomb Mac and Felicia Scorpio’s (John J. York, Kristina Wagner) wedding! However, he may be in for a big unpleasant surprise if he tries to get rid of Sonny Corinthos (Maurice Benard) for Ava! Stay tuned to GH and check General Hospital spoilers frequently to see what happens down the line!