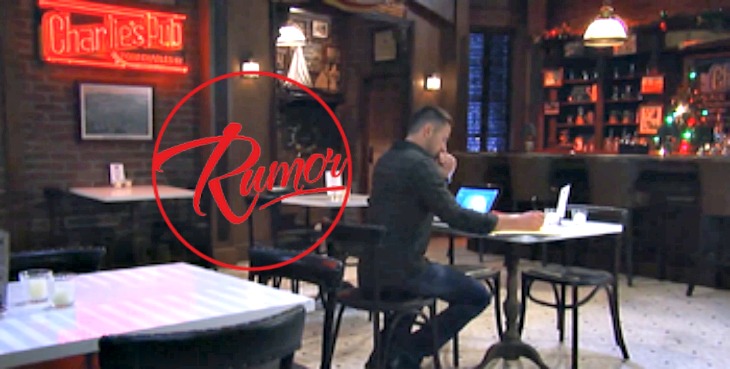 A young girl named Daisy (Kelsey Wang) was in Charlie’s passing out promotional postcards for a concert in the park, while Brad and Alexis Davis (Nancy Lee Grahn) discussed nuWiley’s (also unkown actor), who of course is actually Jonah Corinthos, genetic heart defect, as well as Brad’s fear that the baby daddy could come in and stake a claim to the baby.

Welcoming #KelseyWang to @GeneralHospital and showing her the ropes! #GH #Daisy pic.twitter.com/Vxhx93aOID

General Hospital news reports Daisy is a cast character and doesn’t mention her portrayer Kelsey Wang as a day player (temporary, as opposed to recurring or contract). So Daisy has to fit into Port Charles somewhere and be connected to someone! Some GH fans have commented she may be a love interest for Kristina Corinthos (Lexi Ainsworth), but considering the scenes Daisy was in, it makes much more soapy sense to for her to be Brucas’ baby mama!

If so, Brad and Alexis were in mere earshot of Daisy hearing their conversation, and if she had heard very much of the conversation, she may have put two and two together and realized Brad was one of the adoptive parents!

When Julian contacted the baby mama, he did so by phone, and there is no evidence from those scenes that any names were mentioned at all. Julian didn’t seem to recognize Daisy’s voice, but the conversation they had would have been much more serious, and Daisy likely was not so bright and bubbly as she was in the pub!

Alexis has never spoken to the baby mama either, nor does she know who she is, although she knows some of the details of how the baby came to be, having contacted Diane Miller (Carolyn Hennesy) to ask questions about if the heart defect was known of by the mother.

General Hospital fans know that what comes around goes around, and the secret is bound to come out and Brad and ultimately Nelle Benson (Chloe Lanier) will have to pay the piper! Keep watching GH and checking General Hospital spoilers frequently to see when the truth about Baby Wiley/Jonah is revealed!

The Young and The Restless RUMORS: Rosales Newest GC Family – Arturo and Rey’s Rift To Be Revealed