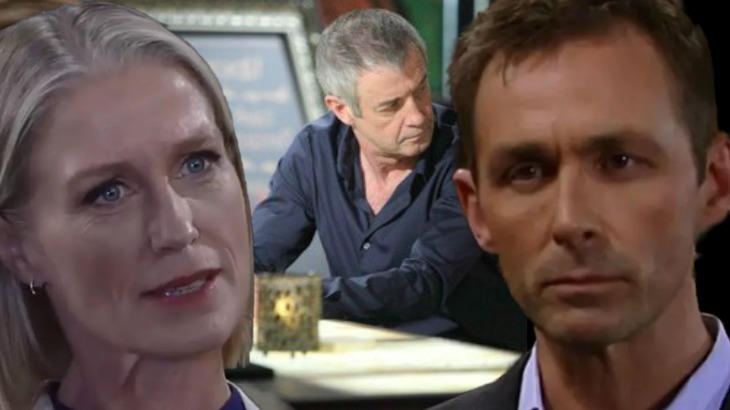 General Hospital spoilers tease that there could be a Cassandra Pierce (Jessica Tuck) connection to the malady that Gregory Chase (James Read) has contacted his son Dr. Hamilton Finn (Michael Easton) about for treatment. Gregory and Cassandra may have the same disease, or two diseases closely related or mutated.

It seems bizarre and far-fetched, considering that Cassandra was first kidnapped from the WSB hospital facility and then held in a Canadian clinic and Gregory Chase has been teaching in the United States apparently on the West Coast recently. However, there is one link between Cassandra and Dr. Chase: his son, Dr. Hamilton Finn! Could someone now be targeting Finn through his family, and if so, who?

#GH Robert: Cassandra wouldn’t be giving us this much trouble, if the good doctor hadn’t revived her.
Finn: Seen my other, uh sock? I uh…
Agent Scorpio, good morning. #FAnna pic.twitter.com/ntnstpRdJs

It’s possible that the disease has mutated since Cassandra’s having been injected with it; Cassandra was in a coma, and then Finn developed a protocol that brought her out of the coma, although she still had a long way to go towards full healing. In addition, she was intercepted by an as yet unrevealed Cassadine between the clinic and the WSB hospital facility.

So how could Finn’s father develop the same disease or a variant of it? Cassandra never had a rash that was mentioned, however, Gregory mentioned both a rash and fever, and there are likely other symptoms as well. If someone IS targeting Finn through his family, then it’s likely that his father was poisoned with the disease deliberately, in a manner that the older Chase would not have realized, possibly through food.

There may be a Cassadine link, however the only Cassadine link that Finn could have would be a coincidental one; a link through his ex–fiancé Hayden Barnes (Rebecca Budig) who had married Nikolas Cassadine, (Tyler Christopher, Nick Stabile) prior to his presumed death. GH fans have suspected that Nikolas turned dark before his death, and others think it is likely Valentin Cassadine (James Patrick Stuart) helped Nik fake his death and disappear.

Even though there have been no confirmed reports of a Nikolas reappearance or recast, many fans consider it likely that the mystery Cassadine who kidnapped Cassandra might be Nikolas. That would provide the link between Cassandra, the Cassadines, and the elder Chase to Hamilton Finn. Time will tell; keep watching GH and checking General Hospital spoilers frequently to see what happens next in this storyline!

General Hospital Spoilers: Time’s Running Out For Sonny, Margaux More Determined To Take Him Down