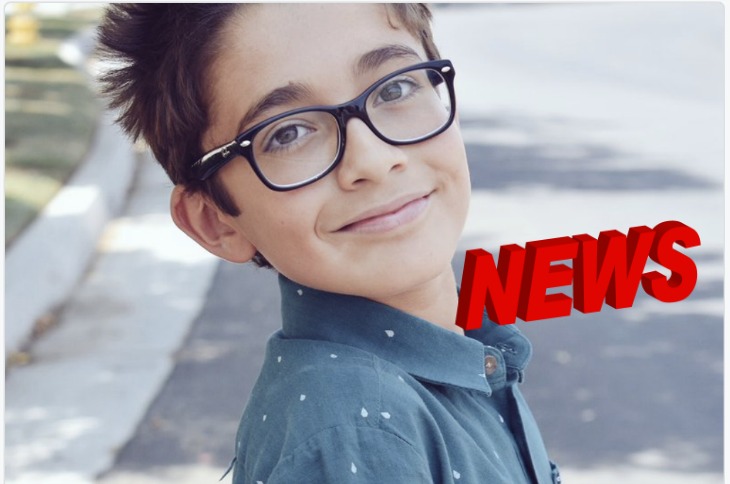 Latest news reports out of Port Charles say that the cutest Cassadine, General Hospital’s Spencer (Nicolas Bechtel) is coming back from France with his grandma Laura Collins (Genie Francis)! Both Jon Lindstrom’s (Kevin Collins/Ryan Chamberlain) and Nicolas own Twitter accounts feature a cute “Spencer sandwich” picture with Genie, Nicolas and Jon on the set of GH. Jon Lindstrom tweets, “Something about Nicolas Bechtel makes me want to tickle him relentlessly!”

Spencer appears to be a little bit taller and definitely a little bit older than the last time General Hospital fans saw him on the show in August 2017. He also appears a little leaner when you see other pictures of Nicolas on his Twitter page. In real life, Nicolas is 13 years old, so we may be seeing a teenage Spencer with a lower voice and an attitude that may not be so precocious and cute anymore! However, if Jon Lindstrom still wants to tickle him, he may not yet have quite reached that point in his maturity!

Although nothing has yet been revealed about Spencer’s part in the upcoming storylines, or his first airdate, we should be seeing him in the next month or so. Spencer has always been one of the most popular characters on General Hospital, and we can imagine if Spencer is back in town for any length of time, and is being written as his actual age, one storyline we can see Spencer being part of is the sad story of Oscar Nero (Garren Stitt).

Spencer will want to support his lifetime friend Josslyn Jacks (Eden McCoy) if things don’t go well for Oscar, as well as being well able to put a snotty Cameron Webber (William Lipton) in his place! Undoubtedly Spencer will once again try to make himself a thorn in Valentin Cassadine’s (James Patrick Stuart) side as well, or at least a major annoyance!

General Hospital fans will look forward to seeing Spencer onscreen again after such a long absence; keep watching GH and checking General Hospital spoilers on a regular basis to see when his first airdate is and what kind of mischief may be ahead!

The Bold and the Beautiful Weekly Spoilers September 24 to 28: Bill Pulls Out All The Stops In Court – Katie and Throne Marry & More