General Hospital Spoilers: Time’s Running Out For Sonny, Margaux More Determined To Take Him Down 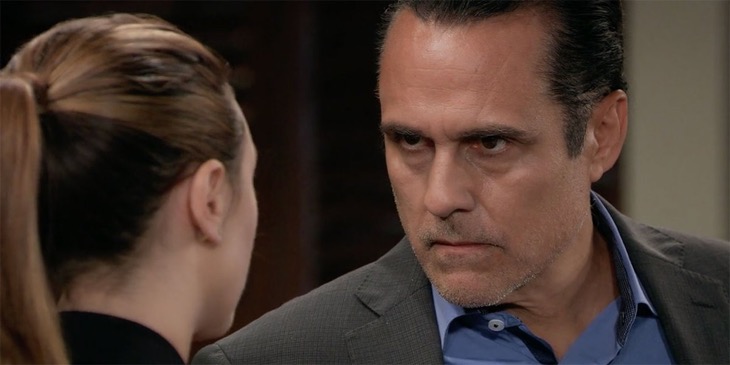 General Hospital spoilers indicate time is running out for Sonny. (Maurice Benard) While there’s no doubt that he’s seen his fair share of drama throughout the years, he’s never seen anything like this! That’s because there’s a strong possibility that one huge secret might end up destroying the Corinthos’ family.

According to Soaps in Depth, Mike (Max Gail) never realized that by helping his son by blowing up Charlie’s pub, he would only make things worse on Sonny. That’s because the explosion unearthed the body buried underneath the pub.  They later find out the body is actually that of the Margaux’s (Elizabeth Henrickson) father – the same DA that has been on Sonny’s tail for quite some time now.

General Hospital co-head writer puts it this way, “Up until now, Margaux has simply been doing due diligence as a district attorney. She has been after Sonny because, like many a district attorney before her, she is interested in bringing down the criminal element in Port Charles. She does not like the idea of people getting away with crime. And she is particularly against organized crime.”

Things are about to get very personal for Margaux she is going to get a lot tougher. Seeing that Sonny is the man behind Margaux’s own father, Vincent Marino’s death, Margaux won’t let anyone get away with this too easily.

Sonny isn’t going to allow Margaux the chance to put Mike away like she did Carly. A brand-new #GH starts RIGHT NOW on ABC! @MauriceBenard #GH55 pic.twitter.com/nH08w1tYLf

Since Margaux is very interested in Drew (Billy Miller) and we know that Drew has all Jason’s memories will Margaux try to use Drew to find out what Jason knows?  Although, Margaux cares for Drew she is not above using whatever methods she has to.  Margaux is a person who believes the end sometimes justifies the means.

Do you think Drew has any memories of Sonny’s involvement with the body?  Do you think Sonny can keep Mike from revealing what he knows?  One thing we know for sure Sonny is about to get a lot of trouble coming his way.