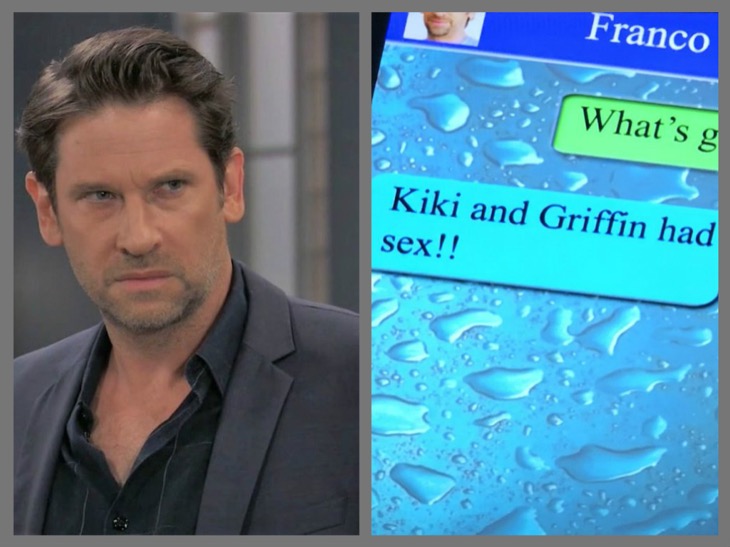 General Hospital (GH) recap for Thursday, August 9, 2018 reveals, Franco (Roger Howarth) tries to get Alexis (Nancy Lee Grahn) to listen to him. Franco tells Alexis she will lose the case. Franco tries to tell Alexis not to ask certain things.

The judge comes in before Franco finishes talking. Alexis is giving her opening statement. Scottie (Kin Shriner) gives his opening statement. Liz tells Franco to stop texting before his phone gets taken from him. Ava texts asking what is going on.

General Hospital’s Liz (Rebecca Herbst) takes the stand. Liz talks about the shadow program. Liz tells Alexis about the rotation with Bensch (James DePaiva) and his bad review. Epiphany (Sonya Eddy) testifies. Epiphany gives Scottie a lesson on women and pompous men. Epiphany knows an upset woman when she sees one. Epiphany tells Scottie that it wasn’t hard to figure out why Kiki was upset. Francesca (Celeste DeAstis) takes the stand. Francesca talks about Bensch berating her.

Francesca confesses to sex with Dr. Bensch. Francesca slept with Bensch to keep her job. Scottie argues that Francesca didn’t move up in her job. Alexis redirects. Alexis asks if Francesca wanted sex with Bensch. Francesca says she was coerced into sex to keep her job. Ava takes the stand. Franco texts needing to talk to her. Ava talks about Bensch coming to see her. Ava talks about Kiki’s meeting with Monica (then Patty McCormack). Scottie declines questioning Ava. Alexis calls Kiki to the stand. Kiki talks about Bensch helping her. Kiki says after she and Dillon (Robert Palmer Watkins) broke up Bensch became more attentive.

Griffin is confronted with the truth, West Coast. What damage control can he do before Bensch weaponizes it? An all-new #GH STARTS NOW on ABC! pic.twitter.com/MMlWEgV494

Kiki talks about the evaluation and the room key. Kiki says she ran out of Bensch’s office, that was the day Liz found her. Scott declines to question Kiki. Bensch demands Scottie use the picture of Kiki and Griffin. Bensch and Scott argue. Bensch wants to know if Scottie is trying to tank his case. Bensch threatens to fire Scottie and take over himself. The judge calls a recess. The judge calls the attornies to the bench. Franco calls Griffin to the side and tells him he knows what happened. The court is back in session. Scott shows the picture in court. Kiki explains the picture. Alexis wants to call Griffin to the stand.

Curtis And Jordan Meet At The Metrocourt

General Hospital’s Curtis (Donnell Turner) and Jordan (Vinessa Antoine) meet at the Metrocourt. Jordan and Curtis get a room. Curtis wants to do this on a regular basis. Curtis’ phone rings, its Chaundra. Jordan asks about Chaundra. Curtis tells Jordan he hasn’t spoken to Chaundra and wants to meet back there tonight. Jordan questions Stella (Vernee Watson) about Chaundra. Stella admits to contacting Chaundra. Curtis considers listening to Chaundra’s message.

Mike Is Getting Progressively Worse

General Hospital’s Carly (Laura Wright) is home. Carly keeps talking about Nelle (Chloe Lanier), Sonny (Maurice Benard) stops her. Carly tells Sonny she and Jason (Steve Burton) talked all night. Mike (Max Gail) comes in and wants to spend time with his daughter in law. Mike asks where she’s been keeping herself. Mike wants ruby slippers to return to his old self. Mike is going downhill fast, Carly realizes this. Sonny tells Carly that Mike is slipping further away.

Sonny and Carly take Mike to the hospital. Stella meets them in the lobby and offers to go with Mike to see the doctor. Carly says Stella is really good with Mike. Sonny says she does no wrong in Mike’s eyes. Stella holds Mike’s hand while he sees the doctor. Mike doesn’t remember the conversation with Stella. Stella tells Mike she will step out when he gets stitches.

Stella tells Mike how he helped with Curtis. Stella asks Sonny and Carly if Mike’s condition has changed. Stella tells Sonny that deep down Mike knows and advises him to include Mike in the decision. Sonny offers to make lunch, Mike wants to lay down. Sonny knows Stella is right but it should be Mike’s decision. Sonny isn’t ready for Mike to move into permanent care. Sonny is spread really thin. Sonny and Carly love each other.