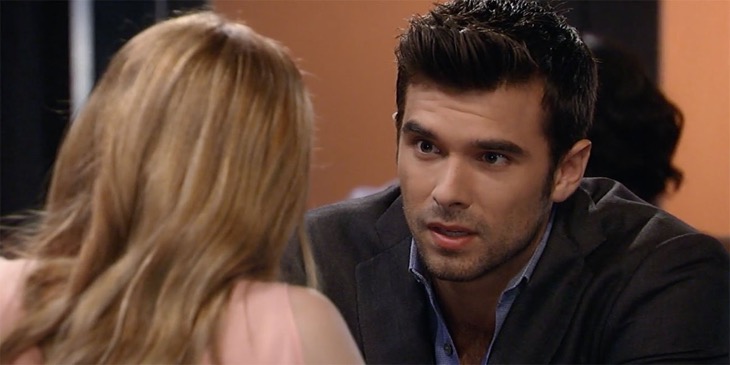 The “General Hospital” recap for Wednesday, July 11, 2018 revealsMaxie (Kirstin Storms) is looking through bathing suits and shows at Crimson. Mac (John York) and Felicia (Kristina Wagner) have James and they need help with the Instagram story for Crimson.

Maxie And Lulu Have A Break Through

Lulu (Emme Rylan) and Maxie argue over the meeting at Crimson. Maxie tells Lulu that maybe it’s because she had to come to Crimson where Nathan (Ryan Paevey) was killed. It’s been five months since Nathan’s death and Lulu tells Maxie she stays up at night wondering what she could have don’t differently. Lulu says she did the article to Maxie, Nathan, and James, so they would be safe. Lulu wants to know if this is a game and demands Maxie tell her if she never wants to speak to her again.

Is their truce over already? Lulu wants what she and Maxie used to have, but something’s standing in her way. #GH is brand-new and STARTS NOW on ABC! pic.twitter.com/pSAHRYGopa

Nelle Is Upset Over The Pre Nup

General Hospital’s Nelle (Chloe Lanier)calls a lawyer about the prenuptial agreement and Michael (Chad Duell) walks in questioning what’s going on. Nelle says the agreement is unromantic, Michael says Ned (Wally Kurth) won’t marry them unless it’s signed. Michael tells Nelle it’s only important if they divorce and he’s not planning on doing that. Nelle has no intention of divorcing him, Michael says she shouldn’t have reservations about signing the agreement then it’s just a formality.

Michael takes the papers to file them and he says he will bring Nelle back a copy. Ned comes in and talks to Nelle about the pre-num and tells Nelle a pre-num is not mandatory. Ned tells Nelle that she and Michael made the right decision. Chase (Josh Swickard) calls Nelle, he needs to see her right now. Drew (Billy Miller) shows up for a drink with Ned and Michael. Ned mentions that prenuptial agreement and Nelle’s reaction to it. Ned goes to get cigars, Drew points out that everyone except Michael seems excited about the wedding. Michael tells Drew that he thought this through and marrying Nelle is the right choice. Drew wants he and Michael to act like a family again.

Obrecht’s plans are up in the air, West Coast. Can Peter convince her to let him live? A dramatic, new #GH starts RIGHT NOW on ABC! pic.twitter.com/ljmYAFnYnD

Liesl And Peter Work On His Novel

General Hospital’s Liesl (Kathleen Gati) has Peter (Wes Ramsey) in the stables at Windemere, Peter screams for help. Liesl tells Peter to stop screaming or she will inflict pain to cause those screams. Liesl realizes the notebook is missing when she wants to work on the book. Peter tells Liesl it’s time to decide between revenge and being arrested. Peter tells Liesl that she can be connected to him through the notebook. Liesl wants to pick up where they left off. Liesl wants Peter to think of this novel as his legacy. Nina tries to call Liesl to warn her Valentin is on the way, she doesn’t hear the phone. Peter begins telling Liesl what to write.

General Hospital’s Valentin (James Patrick Stuart) is on the phone telling someone he and the horses can take care of themselves. While Drew tells Nina (Michelle Stafford) she’s been hiding something for weeks and wants to know if she’s ready to talk. Drew tells Nina that the August issue is supposed to be at the publisher tomorrow and 45% of the aid space hasn’t sold. Valentin overhears the conversation. Nina apologizes for the oversight and says it will never happen again. Drew thinks maybe Nina needs time off, she disagrees. Nina promises to get those ads sold by tomorrow night.

Valentin tells Nina that Charlotte misses her and wants to see her. Nina tells Valentin that she knows Lulu has her and has already called to see when she wants to visit. Valentin purchased the rest of the ad space in Crimson, Nina is furious. Nina wants to know how she is supposed to react to these ads. Nina refuses to publish the ads, it undermines her authority as editor of the magazine. Nina cannot get past Valentin using an innocent child to hurt Anna. Nina tells Valentin that changed how she looks at him forever. Valentin leaves to go to the stables.

General Hospital’s Chase goes to see Finn (Michael Easton) at the hospital and tells him their parents aren’t coming to town after all. Wyatt (Patrick Gibbons) shows up at the hospital with Poison Oak on his arm, Finn takes care of him. Finn shows him Peter’s picture, Wyatt doesn’t think it’s the man in the cabin. Finn gets called away and Wyatt says it could be Peter, but he had a beard.

Chase Professes His Love For Nelle

General Hospital’s Chase meets with Nelle and tells her he really did fall in love with her. Chase tells Nelle that Michael really wants a future with her and the baby. Chase asks if Michael has done anything to make her doubt his desire for a family with her, she mentions the pre-nuptial agreement. Chase tells Nelle she doesn’t have to go through with this marriage, they can still be together.