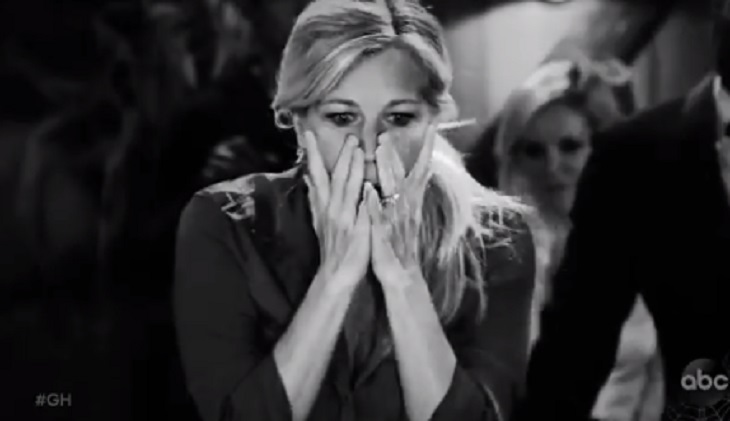 General Hospital (GH) spoilers for November Sweeps reveal Ava Jerome (Maura West) has really piqued Ryan Chamberlain’s (Jon Lindstrom) interest. We don’t suspect she is in any danger, as she is as feisty and dangerous as they come, but has Ryan ever had any “partners in crime” before?

Meanwhile, Kevin’s wife, Laura Collins (Genie Francis) is way too busy with life to notice anything too unusual with her husband’s behavior to question him too much – yet! Laura is has taken up the Mayoral election again as well as being a mother and grandmother, so her life is full.

The Powers that Be tease about Jason Morgan (Steve Burton) and Sam McCall (Kelly Monaco) and a possible reunion this fall. Fate drives them closer and closer but so far, something keeps nagging them from taking the next step. Could it finally happen during November sweeps?

Sonny Corinthos (Maurice Benard) has been hounded but DA Margaux Dawson (Elizabeth Hendrickson) since the second she set foot into Port Charles; he didn’t know why until they found the remains of Vincent Marino.

Now that Damian Spinelli (Bradford Anderson) came back and discovered Jeanette Marino (Ely Pouget) had an affair with Joe Scully (Robert Miano), this revelation will force Sonny to work with the enemy to save himself and his loved ones from her never-ending persecution.

General Hospital sources reveal Carly Corinthos (Laura Wright) is struggling with nightmares from Ferncliff, but is proving to be tough as she is forces into a legal situation. GH fans have seen Carly backed into a corner many times and that is when she is at her best!

Speaking of legal action, Oscar Nero (Garren Stitt) begins the process to emancipate himself from his parents, Drew Cain (Billy Miller) and Dr. Kim Nero (Tamara Braun). This causes friction between many people, including former lovers, current lovers and ex- inlaws; but it also draws Oscar’s parents closer together.

Can All Couples Survive?

Anna Devane (Finola Hughes) and Dr. Hamilton Finn (Michael Easton) want to give their relationship a chance at a normal life, seeing if they can survive without all the hoopla of the WSB surrounding them. Curtis (Donnell Turner) and Jordan’s (Briana Nicole Henry) wedding day is approaching rapidly, but they continue to fret on how joyous it will be since neither of them know if Aunt Stella (Vernee Henry) will be there.

Franco Baldwin (Roger Howarth) and Elizabeth Webber (Rebecca Herbst) have also planned a November wedding, but are met with some struggles that could lead to them changing their plans. What could cause them to cancel or postpone their wedding date?

GH sources tease that Maxie Jones (Kirsten Storms) remains conflicted when it comes to Peter August (Wes Ramsey). She is very comfortable with him, but maintains her distance due to her loyalty to late husband, Detective Nathan West (Ryan Paevey). As for Lulu and her connection to Peter, she is more of an employee who now gets deeply invested in her hottest story about Ryan as he gets “busy” in Port Charles.

Kiki Jerome (Hayley Erin) and Dr. Griffin Munro (Matt Cohen) may have found their own world of happiness together; but they better hold on tight because Ava is set on vengeance. They are not the only couple who is enjoying that loving feeling; Nina Reeves (Michelle Stafford) who is thrilled to have her daughter, Sasha Gilmore (Sofia Mattsson) in her life, really has Valentin Cassadine (James Patrick Stuart) to thank for making it happen and Nina knows it. Her appreciation has brought back a lot of other feelings for Valentin, is there a reunion in the works for this couple?

Oscar has done everything he can to keep Josslyn Jacks (Eden McCoy) away from him, and in the dark about his cancer; but he may have just pushed her right into the arms of Cameron Spencer (William Lipton), the last person she needs to be with. Joss and Oscar need each other so much right now, will she find out about his illness before it’s too late?

Willow Tait (Katelyn MacMullen) will play a key role for this month involving characters like Liz and Franco, Nina and Valentin, Lulu and Chase (Josh Swickard), and Michael Corinthos (Chad Duell). She is the teacher who is involved with the children; but sources tease she won’t be that important overall.

Be sure to tune into ABC’s General Hospital (GH) to catch up on everything happening in Port Charles. Check Soap Opera Spy often for updates, news, rumors and spoilers!