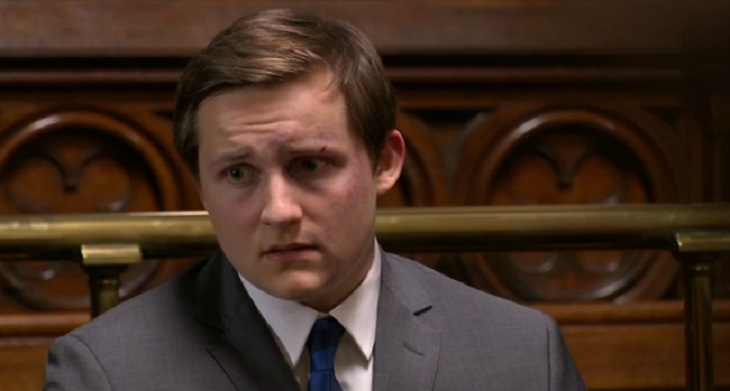 Lachlan White (Thomas Atkinson) is living on borrowed time on Emmerdale. It’s hard to imagine how a character responsible for the deaths of his mom and grandfather can be redeemed.

This week the White family went on a wild car chase after Robert Sugden (Ryan Hawley) when he snatched baby Seb away from them.

Just in time they eyeballed the frantic man running away with Seb and gave chase in their car. The stunt was the first of the New Year and delivered the ultimate soapy drama with the deaths of not one but two beloved characters.

Chrissie White (Louise Marwood) and Lawrence White (John Bowe) were in the speeding car along with Rebecca (Emily Head) and Lachlan, who came unhinged at precisely the wrong moment.

Mad at his mom for sabotaging his romance on Emmerdale, the crazed boy pulled on the steering wheel as she raced after Robert. The disastrous result led the careening car into the path of a big ole truck. Not good.

Chrissie and Lawrence were killed in the horrific collision, and Rebecca is unconscious in the hospital while cad Lachlan walked free. Right now he’s the only one who knows that the crash was his fault. Maybe.

Emmerdale spoilers indicate that Robert isn’t going to let the terrible events go without some scrutiny and he seems to have a solid suspicion about Lachlan’s role in the disaster.

First off he knows that the car swerved, seemingly for no good reason. In fact he’s already sharing his opinions about Lachlan, telling Diane Sugden (Elizabeth Estensen), “I think he did something. I think he might have caused the accident.”

He was referring to the moment he heard Lachlan tell Chrissie at the Emmerdale crash site that he was sorry, in a way that was way too guilty for his liking.

What will Robert do to Lachlan when his terrible suspicions are confirmed?

The Young and the Restless (YR) Poll: Should Lily Take Cane Back?