Days of Our LivesDaytime Emmy Awards 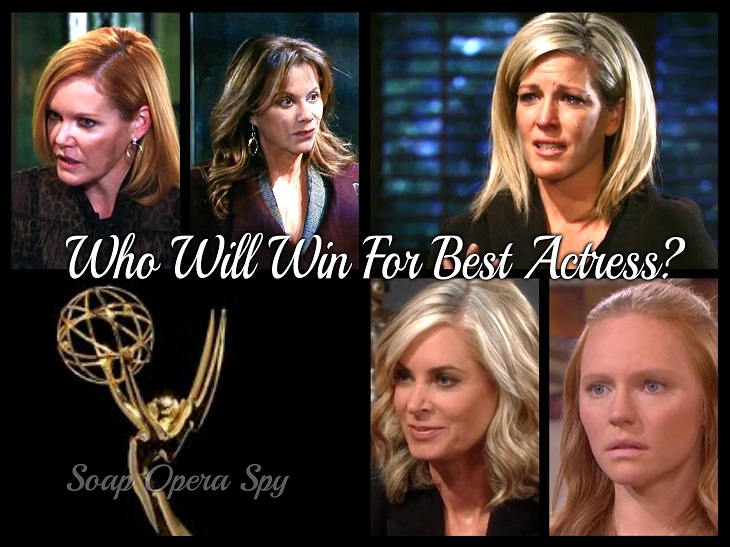 The 2018 Daytime Emmy Nominations were recently announced and we would like to know who you would like to win the Outstanding Lead Actress category. We would like for you to take a vote in our poll on who you think did the best!

First up we have Eileen Davidson from CBS’s “The Young and the Restless.” Eileen portrays the part of Ashley Abbott of which she originated. She has been on the show since 1982. She is a very phenomenal actress and plays the part of Ashley so well. She never let’s us down when it comes to putting her brother Jack Abbott (Peter Bergman) in his place.  And, she’s currently caught up in a complicated storyline with Victor Newman.

Next we have Marci Miller from NBC’s “Days Of Our Lives.” Marci was nominated for her role of Abigail Deveraux. Marci took over the role of Abigail in 2016 and does amazing playing the part of someone with alternate personalities. She is a very phenomenal actress as well.

Then we have three ladies from ABC’s General Hospital starting with the beautiful Laura Wright who portrays the part of Carly Corthinos, a mob bosses wife. Carly is one chick no one is Port Charles wants to mess with! She does awesome at playing the part and now that she has made it her own we couldn’t see anyone else filling her shoes.

Next from GH is Maura West who plays the infamous Ava Jerome. Ava is part of the Jerome crime family and is another one that you do not want to double cross in Port Charles. She has recently done a phenomenal job trying to change the woman she once was. We have seen her at her worst and also at her best. She is one fierce lady, and currently involved with fan favorite Griffin Munro.

Last up with GH is Nancy Lee Grahn who portrays the part of Alexis Davis. Alexis is an attorney who is known for always helping those she cares about. She even went through a time on the show where she lost her licenses to practice but now is at it again. Nancy is a very amazing actress and she never let’s you down with her storytelling. Would you like to see Nancy win this category?

Please take a vote in our poll and let us know who you think deserves to win Outstanding Lead Actress. As always, don’t forget to check often with Soap Opera Spy for all your soap needs.