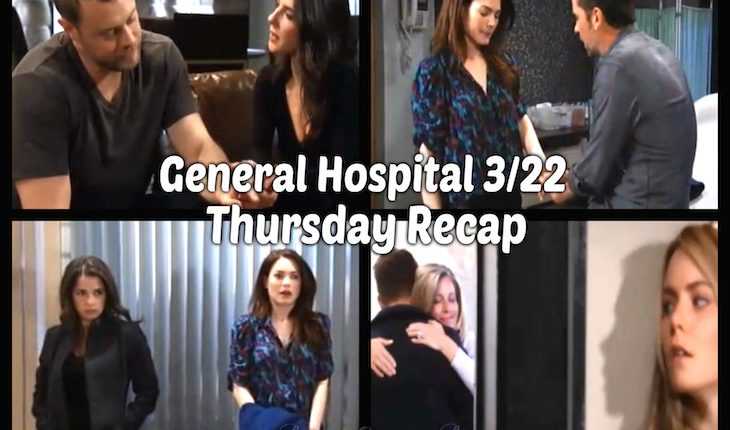 Across town General Hospital Kim Nero (Tamara Braun) and Carly discuss Oscar Nero (Garren Stitt) and Joslyn Jacks (Eden McCoy). Carly thanks Kim for her son’s heroism and tells Kim it is just a matter of time before Drew Cain (Billy Miller) is free because Sam Cain (Kelly Monaco) and Jason Morgan (Steve Burton) belong together. Carly tries to warn Kim about Julian Jerome (William DeVry) but Kim assures her he is not over his ex-wife Alexis Davis.

Alexis and General Hospital Hamilton Finn (Michael Easton) are at Kelly’s when Julian interrupts them. Julian and Finn exchange harsh words; Finn accuses Julian of being jealous of his friendship with Alexis then leaves. Julian demands to know how serious Alexis is about Finn and admits his Jealousy.

General Hospital Anna Devane (Finola Hughes) and Andre Maddox (Anthony Maddox) talk on the docks; about Henrik Faison (Wes Ramsey) and her relationship with Finn. Andre encourages her to tell Finn how she feels. Anna is hesitant, as Finn appears behind them and Andre leaves so the two can talk.

At GH, Sam and General Hospital Elizabeth Webber (Rebecca Herbst) talk. Sam wonders if Franco Baldwin (Roger Howarth) may still want to hurt Drew, but Elizabeth tells Sam she will be the one to hurt Drew. Sam is stunned by her statement.

Elizabeth demands Franco tell her the truth; he admits to having a panic attack in Jim Harvey’s (Gregg Evigan) hotel room. She forgives Franco but just as he pleads with her to go home, Elizabeth receives a text that Franco’s mother Betsy Frank (Deborah Strang) is on her way to Port Charles and wants to speak with him.

Drew and Sam arrive home and she lets him know she found his wedding ring in Harvey’s room. He puts it back on his finger as Sam tells him through tears that she needs to talk to him.

Meanwhile, back at the Metro Court, Michael informs his mom he will be moving out of the mansion and will need a temporary room. Carly and Michael leave to look at an available room and Nelle enters Carly’s office and plants the blood-stained scarf on her desk.

General Hospital airs weekdays on the ABC network. Let us know what you think by dropping us a line with your thoughts in our comments section below. Also, don’t forget to check back with Soap Opera Spy for all the latest news, updates and spoilers on General Hospital and all your favorite daytime television shows right here!

As always, more detailed spoilers and a full collection of pictures for the week in question will appear here on Soap Opera Spy on Sunday, March 18, when there could be more clues and hints over exactly what’s going on.