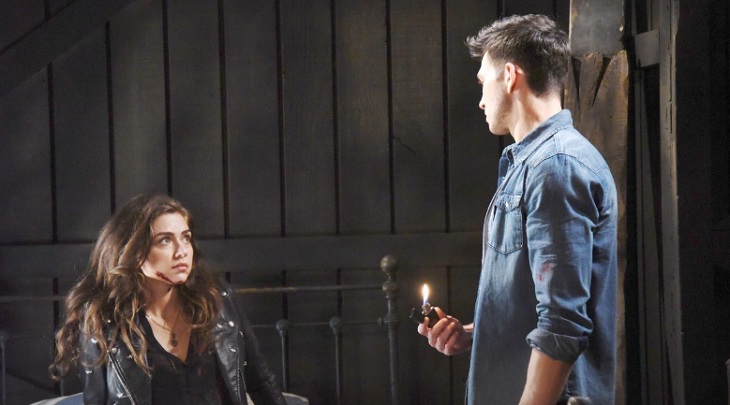 “Days of Our Lives” spoilers for Thursday, June 14, tease that Ben (Robert Scott Clifton) will deal with a rattled Ciara (Victoria Konefal). Now that she’s awake, she’ll have to face the reality of her situation. Ciara’s stuck with one of Salem’s worst enemies! Ben is a murderer and he used to be a real menace to society. He claims he’s better, but Ciara won’t be so sure about that.

However, Ben will attempt to ease Ciara’s mind. He’ll promise that he’d done causing harm. Ben hopes to do some good in the world and he’s starting with this crash victim. He’ll explain that he picked Ciara up after her accident and took her to the cabin. Ben will promise that he only wanted to help.

Ciara will likely try to bolt, but there’ll be a big problem. Her leg’s broken, so she’ll realize she’s trapped with the supposedly reformed monster. Ciara will just have to hang in there and hope she makes it out of this alive. Fortunately, Ben has indeed changed. He’ll actually manage to bond with Ciara during their time together, so DOOL viewers will want to stay tuned.

Meanwhile, Hope (Kristian Alfonso) will grow increasingly concerned about Ciara. With Tripp’s (Lucas Adams) assistance, Hope will kick off a search for her daughter. They’ll team up for a desperate hunt, but “Days of Our Lives” spoilers say there’ll be some snags along the way. That’s to be expected on the NBC soap.

Other “Days” spoilers say Brady (Eric Martsolf) will remain fed up with Theresa (Jen Lilley). She’ll hate that she’s having to play dirty, but she’ll feel like it’s the only path to happiness. Theresa just isn’t willing to give up on Brady and their family. She’ll make some steamy moves on Thursday in hopes of winning Brady over.

Elsewhere, Eve (Kassie DePaiva) will keep fighting. She’ll seek out Stefan (Tyler Christopher) and make a pitch for financial support. Eve will hope she can outmaneuver Theresa with a new plot. After Stefan agrees to a deal, things will shift back in Eve’s favor. She’ll be thrilled, but she shouldn’t celebrate just yet. Doing business with a devious DiMera always comes with consequences.

“Days of Our Lives” fans won’t want to miss the shockers and shakeups ahead. We’ll give you updates as other “Days” news and rumors emerge. Stick with DOOL and don’t forget to check Soap Opera Spy often for the latest “Days of Our Lives” spoilers, rumors, updates and news.